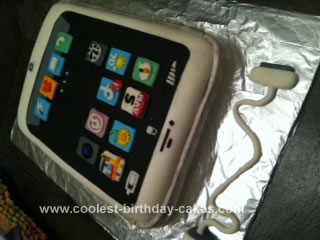 I made this IPhone cake for my stepdaughter’s birthday. I decided to make this cake because she had asked for an Iphone for her birthday and was getting one from her mom.

I started by preparing a batch of fondant (marshmallows, water, vanilla, and powdered sugar). After kneading the fondant to a workable state, I covered it in butter and wrapped it in plastic wrap and refrigerated it overnight. The next morning I started by baking a chocolate sheet cake, and preparing some butter cream icing (butter, powdered sugar, milk,and vanilla).

Once the cake had cooled, I iced a thin layer and refrigerated for about an hour. I then put another layer of the butter cream icing and set aside the cake. In the meantime, I had taken out the fondant so that it would come to room temperature. Once the fondant was ready to work with, I rolled it out and covered the cake. I then took a black sugar sheet and cut it out to form the screen on the IPhone. I also used a few pieces to construct the top details in the phone.

I used a little water to stick the sugar sheet to the fondant. I then rolled out a thicker strip of fondant to wrap around the entire cake to serve as the silver part around an iphone. I also shaped the side button details, and the bottom button. I then painted the silver part with silver dust mixed with a little clear vanilla using a paint brush. Next, I began creating the gray “desktop” shelf that holds the main four apps on the lower part of the screen.

I used black gel icing color to create a gray color for the shelf, rolled it out and cut it diagonal on the edges to create the effect of being 3D. I then created the four main Apps for the shelf (phone, music, mail, and safari). I used gel icing colors for this. I also backed each of the square apps with a little extra fondant to give it a “popping” life like appearance.

I then began working on a few other well known Apps to add to the front screen using the same methods. The Apps I chose to add/create included: photos, calendar, messages, camera, weather, clock, itunes, and maps. I also created a battery life indicator for the upper right corner, a locked symbol for the top center, and a signal indicator (all made with fondant). The last thing I created was the charger, which I also made with fondant!

This was such a FUN FUN cake to make and everyone LOVED it. Some people even thought it was a just a picture of an IPhone at first glance when I would show them the pictures I took of it with my phone! 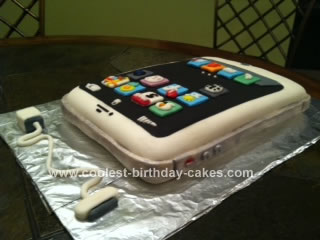 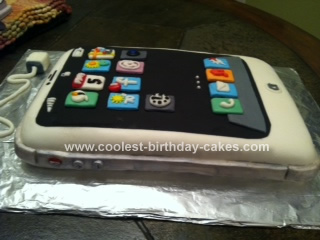