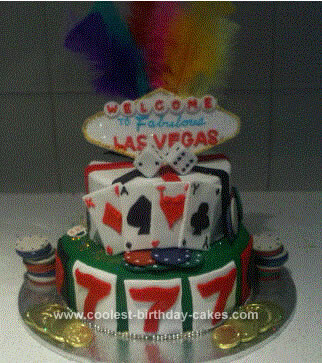 My friend Katy wanted to go to Vegas for her 26th Birthday but due to lack of funds she couldn’t go so I made her a Las Vegas Birthday Cake Idea instead.

I made 2 round cakes from a choc mud cake box mix in different sizes. Then I covered them both in chocolate fondant. (Hint: The fondant sticks best if you brush the cake with alcohol first, I like to use Irish Cream or contreiu, do this in between layers of fondant too).

I then covered the larger cake in green fondant and the smaller one in white, then I used black and red fondant to make stripes on the white smaller cake and put it on top of the green larger cake.

For the Vegas sign I printed a picture of the internet and cut it out to use as a template to cut the shape from fondant. Then I cut 7 small circles of white fondant for the “ Welcome part”. I let those dry. Once dry I glued the circles in place with royal icing and added the wording and the lights with different coloured royal icing by hand. After it was dry I painted it with contreiu and sprinkled gold edible glitter around the yellow “lights” around the edge and clear glitter shards on empty spaces to make it sparkle.

The Playing cards were also fondant that I allowed to dry and drew on with coloured Royal icing. I used chocolate royal icing and black icing sugar to get a darker black. Instead of doing K Q J A I spelt out the birthday girl’s name with the cards. The cards were stuck down to the cake with royal icing.

The lucky 7’s and the suits on the side of the green cake were done with fondant but stuck on to the cake by brushing with alcohol while they were still soft. The sign was leaning on a block of fondant to hold it up, if I was to make this again though I would have stuck toothpicks in the sign to stick it in to the cake before I let it dry.

I originally was going to make poker chips out of fondant too but it was too fiddly and difficult so I just bought some plastic ones as well as the large dice which I set up to say 26 for her birthday, those as well as the gold coins were glued down with royal icing. I also added feathers which I poked into the block of fondant the sign lent on and to finish sprinkled with more glitter. You can never have to much glitter in Vegas.