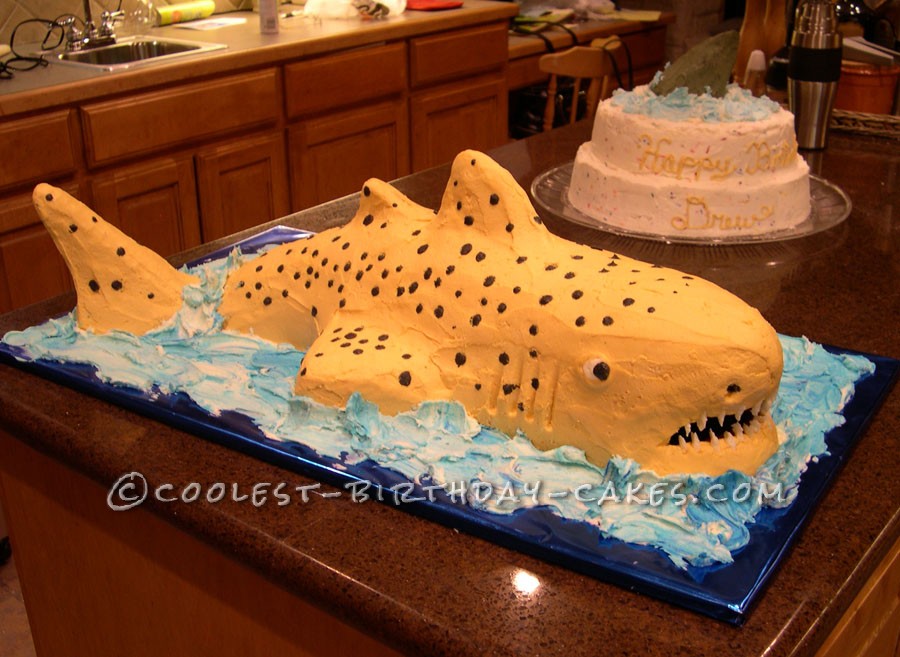 My 11 year old grandson wanted to have a pool party for his birthday. Since he is a shark enthusiast, and I a self-taught baker, I offered to make him a shark cake. It seemed appropriate. That was until he let me know that his favorite shark was the Leopard shark. “Oh,” I said, “no problem.” (Now what?)

Naturally I searched the internet to get a glimpse of the leopard shark. I could see that I had a challenge on my hands but I was not going to let him down. Images in hand, I special cut a cake board in a long rectangle shape upon which the shark would perch. I bought several boxes of his favorite cake flavor (Funfetti) and added instant vanilla pudding mix in order to make the cake heavy and dense enough to layer and also to hold its shape when carved into. Beginning with the largest shapes first, I began to sculpt the 9 x 13 baked cakes, doubling the layers for height where needed and gluing sections together with butter cream.

I hadn’t learned about fondant by this time so I did the best I could with butter cream frosting…lots of frosting. To give the shark fins I covered graham crackers with butter cream and I used a folded piece of cardboard inserted into a cut-out wedge for the mouth of the shark. I indented his gills with a bent paper plate (whatever works) and gave him his spots with a decorator bag of dark gray colored frosting.

Once I detailed him to the point, he resembled the Leopard shark. I gave him water by slathering on white and blue butter cream frosting, leaving the surface choppy to resemble waves.

My grandson’s party was a success and one that he remembers fondly. For me the challenge was a huge turning point in terms of gaining confidence. Soon after, I learned how to make fondant and sugar-paste. Now the sky is the limit! 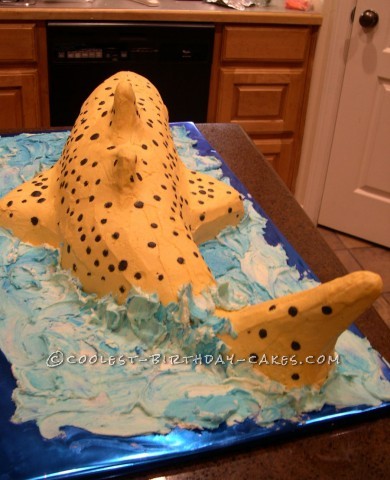