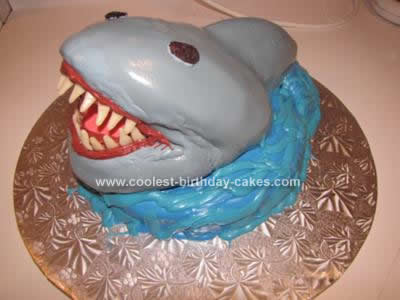 Thank you to all the people who submitted cakes to this site. As you can tell, they were a huge inspiration to me for this Man-Eating Shark Cake idea.

I used the Wilton Football cake pan for this cake. I made 2 cakes, one for the body/mouth and used about half of the other for the fin. An additional 11 inch round cake was used for the “water” base. I made all the cakes and then froze them overnight to make the carving easier.

The first football form was cut at an angle, so that the shark was coming out of the cake tray, the cut off piece was then turned around to be the bottom of the jaw. I cut the tip from the second football cake to use as the fin. The angle was a little tricky, as it needed to be rounded to fit against the back of the shark.

After fitting the pieces together with toothpicks, I added a rough “crumb-coat” of commercial icing to the shark. I colored “Virgin Fondant” with icing gels for the shark skin. Black, and a touch of royal blue did the trick. I then rolled it out to be about 14 inches wide and 20 or so inches long to cover the shark in one piece.

The water base did not get a crumb coat. I simply piped two colours of blue onto the base and a random fashion to resemble the ocean water.

The teeth were nougat candies, warmed briefly in the microwave to make them easy to cut/carve. I had to experiment a bit so that they looked like shark teeth rather than vampire fangs.

The body parts are simply fondant, crafted by hand as you would out of playdough. The final touch was some red gel icing, right out of the tube to cover where I put in the arm and leg and resemble blood.

I hope you can get some inspiration from my cake as I have from the others here! Happy Baking! 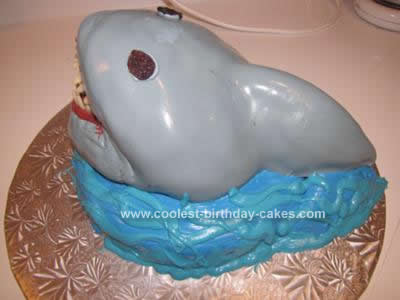 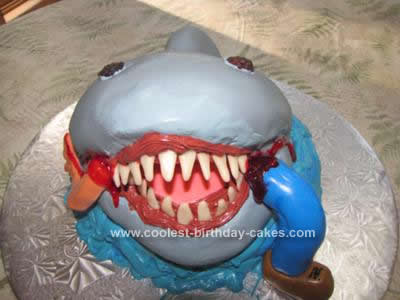 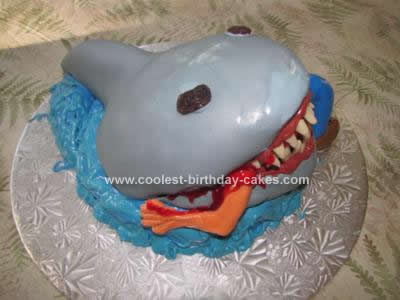