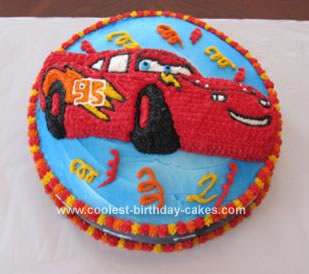 I made this cake for my friend’s son for his 2nd birthday. I wanted to use the character cake pan, because he is so detailed – but I knew it would not be big enough. So I used a 14 -inch round 2-layer cake for the base, then used the Wilton character cake pan for the car.

I wanted to give the impression that he was in the winner’s circle, in the middle of the track. I only used a small amount of batter in the car pan – so he would not be too tall. I iced the base cake in white frosting, then used blue spray color all over. After that set up, I placed Lightning McQueen on top & began to decorate (I sort of used the directions that came with the cake pan, I just tweaked them a bit).

When I finished decorating the car, I tinted fondant with black gel color & rolled it out to put along the sides of the cake (for the racetrack). I secured it to the sides of the cake with a little frosting, then piped the white lines on the road. I used the left-over bags of red, yellow, & orange to pipe edges on the top & bottom of the cake, as well as for the confetti surrounding Lightning McQueen. I just used a boxed mix for the cakes (3) & canned frosting mixed with confectioner’s sugar for the icing (works as well as lard icing – but tastes so much better!).

The fondant was ready-made, also. For the piping, I used #16 & #18 tips for the coloring, and # 3 tips for the outlines. This was only my second attempt at using fondant. I have never tried to cover an entire cake with it, just details, but I’m getting less afraid of it ;0)

This homemade Lightning McQueen in the winner’s circle cake feeds a LOT of people – they probably had some leftovers.