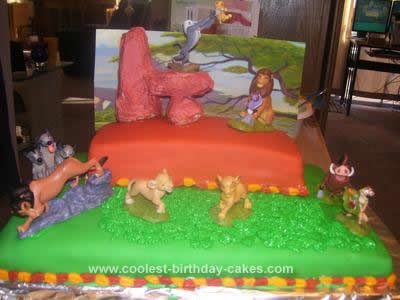 I made this Lion King birthday cake for my son’s 4th birthday party. The cake is red velvet. I used food coloring to color the fondant and covered the cake. I used the Wilton fondant and gum paste mold to mold the leaves and also had dyed them the same colors they show in the movie.

Pride rock was made from rice crispy treats, molded and covered with white chocolate so it had texture like a rock. I bought the Lion King set from a Disney Store to top the cake, using frosting to hold them in place. I do not have experience making themed cakes so if I had messed up my son would be without a cake but I had a vision and was determined to finish it for him.

My son’s party was at Chucky Cheese which I had received numerous compliments by my host and other workers. My host said that the staff was also in the kitchen taking pictures and saying how much they loved it. Although it took me many hours to complete making the cake, it was so much fun and I have been asked to do other birthday cakes which I will also be uploading the more recent one I did.