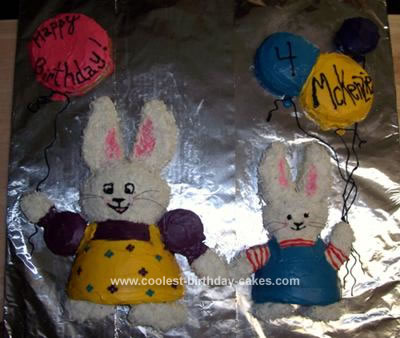 This Max and Ruby cake was made with 2 cake mixes. They were baked in 3 batter bowls. One large bowl and two small bowls and two cupcakes. (One of the small ones was a little larger then the other.)

The tops of the cakes will come out a little domed. I cut them off and used them as the balloons.

Set the other half back up so the bottom is larger. Cut this in half again. So you have a rounded piece for the heads of Max and Ruby.

Cut the last smaller bowl cake into pieces for the arms and the legs.

Use the two cupcakes for Ruby’s sleeves. the tops can be cut off to make it the same level as the cake.

I made regular frosting (butter, powder sugar recipe). I did one layer of plain white frosting (a crumb layer). Then I made more white frosting and some colored frosting. Frost the colored parts first. I put shredded coconut the white frosted body. I used black piping for the face details.