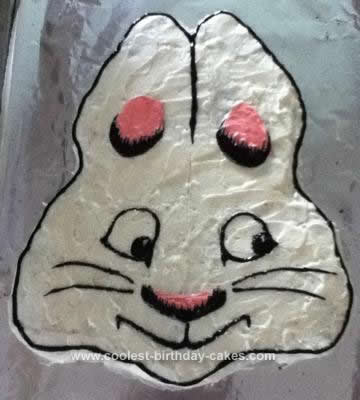 My daughter Elena absolutely loves Max and Ruby. She’s watched the same episodes literally HUNDREDS of times on DVD! So when it came time to make a cake for her 3rd birthday, it was kind of a no-brainer. For her 2nd birthday party we made a Foofa cake (Yo Gabba Gabba) which turned out well, but this year’s Homemade Max Birthday Cake, well, take’s the cake!

I started by baking two 9″ rounds from a cake mix (substituting half the oil with applesauce) with the first round becoming primarily just Max’s face. I then cut a small arc from the 2nd round and placed it above the bottom cake to eventually be Max’s ears. Using a picture of Max from the internet and some string to get an idea of proportion and shape, I eyeballed and cut the ears with a serrated knife. I took leftover scraps from around the ears to make Max’s distinctive chubby cheeks.

I opted to make my own vanilla butter cream icing so as to control the consistency to ease frosting without too much crumbling. Note to self: don’t use a chocolate cake mix in the future when covering with white icing as all the crumbs can and will show up in the icing. Yellow or white would be much easier.

After the cake was fully frosted, I made some pink from the extra icing to shade Max’s ears and nose. I then traced with black tube decorating icing the outline of Max’s face and my wife carefully added his features.

All in all we are VERY excited with the results and expect the cake to be a huge hit at our daughter’s party tomorrow. I’ve included pictures of the 3 main steps so if anyone wants to recreate this cake it’s really not as hard as it might look.

Hope you’ve enjoyed it as I sure enjoyed making it! 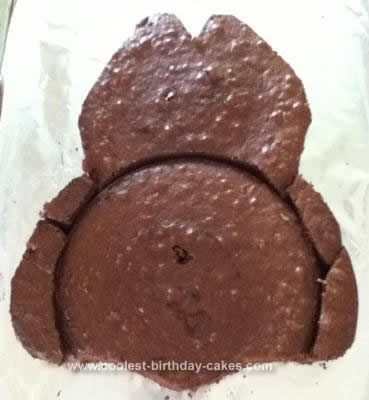 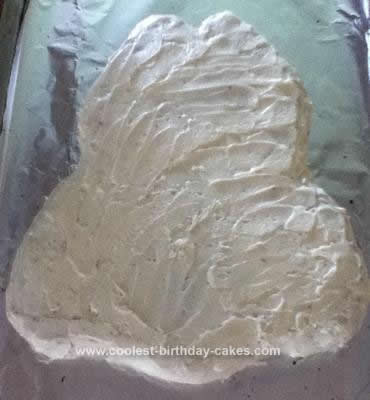