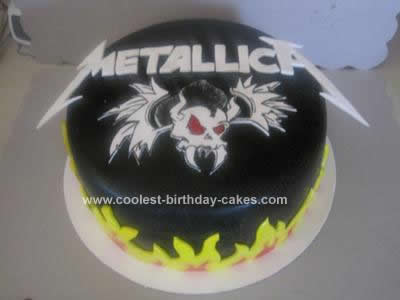 This Metallica Cake Design was requested by a Metallica fan’s wife for her husband’s birthday. She wanted her husbands tattoo of “the scary guy” incorporated into the design of the cake. It was a white cake with chocolate fudge icing. I covered it in black fondant. I suggested to the client that they choose fondant so that we would not have to dye the icing black.

The dyed teeth and mouths would make for some funny pictures at the birthday party but it wouldn’t be pretty. The fondant had a “leather” texture to it. I made flames out of gumpaste, then I painted the gumpaste with food coloring mixed with vodka. I drew a template of the Metallica logo onto paper then I cut it out and used it to cut the letters from a sheet of gumpaste.

The skulls outline was drawn on to paper and cut out of gumpaste also. I freehanded the painting on top though with black and red food coloring mixed with vodka. I was pretty proud of how it came out. 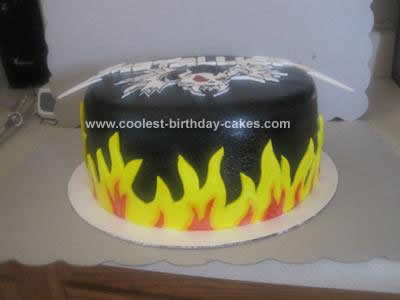