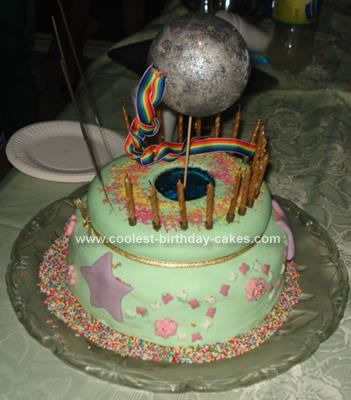 I was inspired by the MGMT ‘Electric Feel’ music clip and decided to theme my 18th birthday party around the eclectic, enchanted garden style party depicted in the video.

The MGMT Electric Feel Cake consists of two large, round chocolate cakes and one smaller round sponge cake stacked on top of each other and covered in green fondant to represent the hill the party in the video clip takes place on.

There’s a pool of blue jelly cut into the top layer and out of it is a cooking skewer supporting a makeshift-moon with rainbow ribbon coming out of it in an attempt to mimic the ‘moon blood’ that spills in the clip (Really, watch it, it’s an awesome clip)

Then the cake is covered in assorted sprinikles and fondant stars / flowers.

It looked awesome when all the sparklers and candles were lit (less so in full light when you can see all the rough bits) and was my second attempt at using fondant.

More practice necessary but I tried!