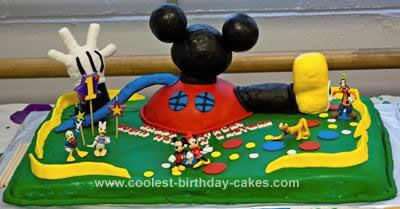 We had about 100 guests, so I made an entire sheet cake using two 9” X 13” shallow pans. Since some young children can be sensitive or allergic to chocolate, I made one vanilla and one chocolate. I used a 9” domed pan for the body of the Clubhouse.

This was my very first time using fondant, so I just used pre-dyed, store bought fondant. First, I thinly iced the entire cake using store-bought icing. I covered my granite counter top with Crisco (hindsight – DON’T use granite counter tops, it cools down the fondant too much, making it less pliable!), and kneaded the fondant until it was smooth and workable. I then used a greased rolling pin to roll out the green fondant and carefully covered the iced cake with it.

For the Clubhouse, I again used a thin layer of store-bought icing, and covered it with red fondant. For the neck, I used black fondant, which I molded into a “hamburger” shaped patty. The head, ears, leg, foot, arm, and hand were all made of crispy-rice-marshmallow treats, which I also made from scratch. After the cereal mixture cooled a bit, I molded the shapes with my hands, and left them aside to cool completely. I then wrapped each part with the appropriate color fondant.

For the fingers on the hand, I used mini-marshmallows, covered in white fondant, and secured them to the hand & arm (which I actually shaped in 1 piece in order to keep the structure stronger) with toothpicks. I secured the head to the neck, the neck to the body, and the body to the cake by using a long wooden dowel. I used smaller dowels to secure the ears to the head. I also used a wooden dowel to secure the hand/arm to the cake and the foot to the cake.

The details such as the “button” windows, door in the foot of the clubhouse, lines on the hand, and dotted pathway were all made by cutting shapes out of the fondant. The fence was also made entirely of fondant. I purchased the characters from the Disney Store, and used candy-letters to spell out “Happy Birthday”.

I baked the cakes 2 nights before the birthday party, which didn’t take long at all. The hardest part was decorating. I did it the night before the party, and it took roughly 5 hours. It was probably because it was my first time using fondant, plus it was a massive cake!

For the smash cake, I used a 6” round vanilla cake, iced with vanilla frosting. I iced the bottom third of the cake with green icing (for grass), and cut out shapes for the Clubhouse by using fondant. I just laid everything in place, on top of the plain white cake, and stuck a Mickey candle on the top.

My son seemed to really like the cake – when he saw it he did his funny wiggle-dance and said “hot-dah, hot-dah!” (hot-dog). 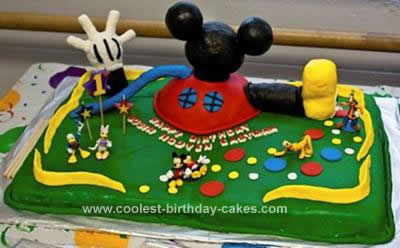