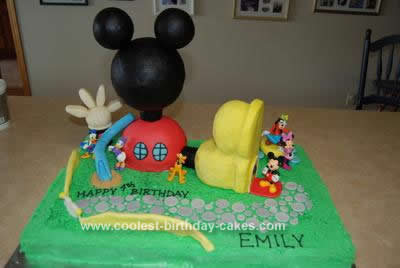 Last year I started a tradition of asking my daughter to choose a theme for her birthday cakes. Last year for my first go at it she wanted “Rocket” from Little Einsteins and this year she asked that I make her a Mickey Mouse Clubhouse cake. There was a bit more to this year’s than last, but I was happy with the way the Mickey Mouse Clubhouse Birthday Cake turned out. The other kids at the party went nuts over it and one kid even asked me if the balloon hand was going to “take off”!

Although I’m not completely new to cake decorating, I have only worked with fondant once or twice before with marginal, somewhat sloppy results. This cake, although very time consuming, ended up not being too complicated to put together.

At the base of the cake are two 11″ x 15″ sheet cakes filled with homemade white buttermilk cake. I made the base of the cake that large in order to allow more room to work with in creating the clubhouse on top, but it did mean that it was quite large and quite heavy. It also meant that I couldn’t make the cakes more than a day in advance because I didn’t have a refrigerator large enough to hold them. I had to make them and frost them the day before the party. In order to support the weight of the cake for when it was picked up and moved to the party-table, I placed them on top of a foil-covered piece of wood I bought at the craft store.

I used cake boards to handle the individual cakes as I took them out of the oven and cooled and placed them side-by-side on the wood-base. Once the cakes were in position on the wood, I then leveled them in place so they would be the same height. I made up some simple buttercream frosting, tinted it green and frosted to make it look like grass. To add to the grass effect, I sprinkled the top lightly with two different shades of green sugar sprinkles.

To make the clubhouse, I purchased a sports ball cake pan and used one of the two halves to bake a chocolate cake in the dome shape. I had extra batter, so I also filled and baked one 8″ round cake pan. In order to give the clubhouse an inch or so more height, I ended up cutting a circle out of the 8″ round cake and stacking the dome on top. I frosted the dome lightly with buttercream frosting and covered in red fondant. (note: I purchased ready-made white fondant and tinted it red with food coloring, make sure to get the “no taste” red because it took a TON of red coloring and still wasn’t as red as the real clubhouse). The windows were fondant tinted blue and cutout in ovals to shape.

The Mickey head resting on top of the clubhouse is constructed from 3 Styrofoam balls covered in black fondant and held together with pieces of barbeque skewers. Unlike the cake, the Styrofoam did not require a layer of buttercream first before adding the fondant. It was a sturdy structure to work with, was dense enough for BBQ skewers to hold tightly, and since it didn’t weigh very much, it didn’t pose a real structural risk later on when attaching to the top of the clubhouse.

For the yellow shoe-door, I made a rice crispy treat in a loaf pan. When filling the pan, I pressed down really hard to get the cereal as densely packed as possible and then put it in the fridge to harden a bit. After extracting the marshmallow treat from the pan carving the shape of the shoe wasn’t as hard as I thought it would be. The rice crispy treat turned out to be a great “sculpting medium” to work with. I just kept shaving bits off with a sharp knife until I got the shape I wanted. In hindsight, I should have frosted the marshmallow treat with buttercream before covering with fondant so that the final result wouldn’t have shown so many of the lumps and bumps from the cereal.

Rice crispy treats also served for various black connector pieces throughout the clubhouse. The “neck” of the clubhouse, the tunnel between the front door and the clubhouse, and the base of Donald’s hand glove-balloon hang out. Each was cut to size and covered in black fondant.

The balloon hand was plain white fondant just played with it like playdough to get the shape and rolled a little piece into a “log” to wrap around the bottom of the glove as a collar. Because the fondant was so thick and heavy, fingers were formed separately in advance, dried to become a bit hard, and then attached to the hand with toothpicks. Once assembled, the hand was pretty heavy and although held to the black structure with skewers, it still had trouble standing up. I ended up having to reinforce the back with another skewer to keep it upright.

I made the slide by tinting fondant blue and rolling it into a log and bending/shaping. I crushed graham cracker crumbs underneath to look like the “landing area” at the bottom of the slide. Slide is attached to clubhouse with skewers.

Pebbles for the walkway were from fondant tinted 2 shades of gray and cut out with 3 different size round cutters (the biggest cutter was the top off a water bottle). The fence is yellow fondant, the gate white fondant with impressions made with a knife to look like the wooden slats. The posts by the gate are lollipop sticks with balls of yellow fondant on top. The clubhouse welcome mat and the stairs/door leading to Donald’s balloon are made from red fondant attached with buttercream “glue”. The picnic table and chairs are hand-formed yellow and blue fondant. Final details on the Mickey Mouse Clubhouse Birthday Cake were the black piping and the placement of the figurines, which I purchased as a set at the local store.

All in all, I was really happy with how real it looked when it was done, my daughter was thrilled, and the cake itself actually tasted good! 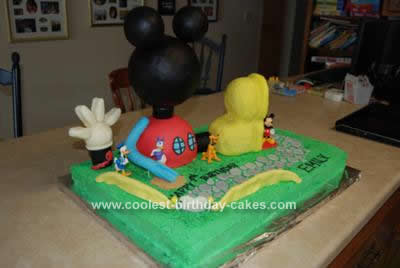