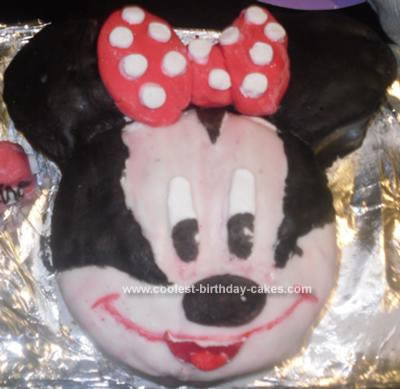 This is my version of a ‘Minnie Mouse’ head cake for my daughter’s 1st birthday. It was very simple to do- I first did a drawing of Minnie Mouse’s head (using her lunch box as a source to copy) onto 2 pieces of A4 stuck together to use as a template, which I then cut out. To get the sizing right to get the size of her head I drew around my deepest circular baking tin so that I wouldn’t have to do any cutting for her face.

I then baked 2 circular cakes (for each cake I used 5 eggs, 10oz caster sugar, 10oz SR flour and 10oz butter). The 1st of the circle cakes I used for Minnie’s head and then the other I used my template to cut out Minnie’s ears and bow. This was probably the hardest part of the cake making as her 2 ears, including the bow, wouldn’t fit side by side on the circular cake. Although the other options are to bake the 2nd cake in a larger tin so that when cutting the ears and bow out they could fit side by side, I decided not to do this as the thickness of the cake may not be the same, therefore leaving Minnie’s head at different levels.

Once I had all the pieces of my cake, it was then just icing it. I used first used icing sugar to stick the ears and bow to the 1st circle (the face) and then covered this with a packet of ‘already rolled’ icing, which was pretty simple to do. I then had a couple of packs of ‘unrolled’ icing which then rolled out so that they were still quite thick (not overally thick but thicker than the already rolled icing and again using my template cut out the features such as ears and the black side parts of face, eyes, nose and mouth. Although the whole face was already iced I felt this added a nice 3D effect.

I was unable to get my hands on any black icing, so once I had put the extra layer of icing on the features such as ears, nose and eyes I painted the features in with black food colouring. And I used the same ‘painting’ technique for the mouth, but with red food dye. For the face there was a issue as I had to work out a flesh type tone, therefore I just used a VERY watery mixture of yellow and pink which I painted over the whole face (however, this did make the face sticky. I have been told since adding icing sugar would stop this).

On my cake, Minnie’s bow is made up purely of icing giving it a very large 3D effect. I only had white icing so I kneaded in pink food dye, then shape the icing into a bow and with the top of a pen I pushed out the ‘polka dots’ in white icing and stuck these onto the bow with icing sugar.