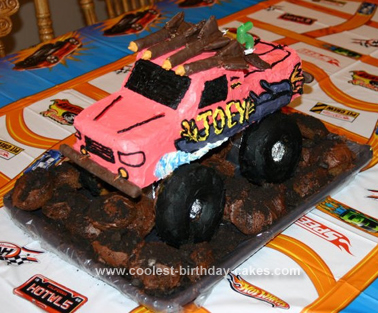 My son wanted a Destroyer Monster Truck Birthday Cake Design for his 5th birthday. It is made of a 9×13 cake, 24 unlined cupcakes, 9 large pretzel sticks, and 4 doughnuts.

I made a base using a jelly roll pan covered in brown construction paper with clear plastic wrap over it. Then I covered two Thomas the Tank bridge towers with aluminum foil to support the truck body. I used a board cut to size with hole drilled for the bridge supports (also covered in foil) to hold the actual body.

I frosted the cupcakes with chocolate frosting and placed on the jelly roll pan and sprinkled with crushed Oreos.

I attempted to dye some frosting red. Turns out it takes a lot of red food coloring to actually make red because this was a whole bottle and still looks kind of pink. If I were to do it again, I would just buy red frosting. I covered the entire truck body in red (including board that was showing). I dyed some frosting grey and made the ship shape on each side.

I partially dyed some frosting blue (streaked blue through white frosting so some was blue and some was still white). I frosted some “waves” in the front of the boat on each side. I used black decorator icing (the kind that comes in the premade tubes) for the outlines and the windows. I added orange “flames out of the ship and yellow to the headlights and my sons name.

My husband drilled holes for candles into the missile pretzels (need to go slow or they break). I inserting the candles into each hole.

I melted the chocolate bark according to package directions and dipped the pretzels in. I put them all on wax paper to dry. For the back bars, I placed the two longer bars parallel with each other and smaller bar between to form an “H”. For the missiles, I added a chocolate chip to each of the missiles to act as tip. I cut a couple graham crackers to small triangles and dipped those in chocolate and then attached them to the missiles while chocolate was still wet. When they had all dried, I added orange to the missile tips.

I placed the back bars in the back of the truck and rear of cab (had to touch up red frosting a bit where they were inserted).

I placed the missiles on the top of cab and secured with toothpicks (tried to put them in far enough to not be obvious but left out far enough to keep missiles from rolling off). I placed 2 toothpicks between board and cake in both front and back and tied some thread to the pretzels and looped it around the toothpicks to hold in place.

I finished it off with a number “5” candle in the back. When candles were lit, it looked like fire coming out of missiles.