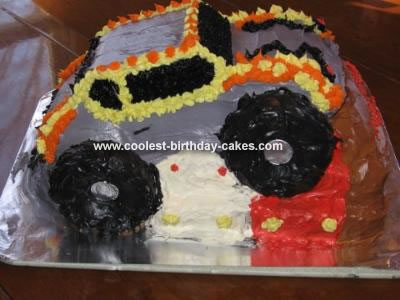 When my son told me he wanted a Monster Truck Cake for his birthday I purchased the Wilton Cruiser Cake Pan and the Wilton “Cars” Food Color because I didn’t think I could make black dark enough for the tires. I also did a practice cake the week before so I could determine what worked and what didn’t work.

The first cake was just the truck elevated on another cake but I was more creative with the real thing. I used a 9 X 13 pan for the bottom, and then I put an 8 X 8 cake on top of the 9 x 13 at the front. I realized that the slant might cause a stress crack in the Cruiser cake so I cut a half circle out of the 8 X 8 cake (the width of the cruiser) where I placed the “truck” and crumbled the cutout to make a ramp for the cruiser to sit on.

I used Crueller Doughnuts for the wheels and secured them with toothpicks. I wrapped quarters in foil and placed them in the center of the black frosted doughnuts. I learned in my trial the week before that it would be best to put the base color on the truck first and work from there with the decorating. My trial cake was “Grave Digger” but my son asked for “Maximum Destruction” so I looked at several pictures of the Truck and worked with a picture on the counter to refer to.

Once my son approved the base color I mixed black, orange, yellow, and red to customize the cake. I used the star tip for most of the cake and a writing tip for the red. Originally I was going to have the truck going over a dirt mound but I saw a picture of the truck going over a white bus on the internet and decided to try to make a bus and a truck/fire truck instead. I really learned as I went along, I cut half circles the width of the tires in the cake for the tires (I took all of the cake out for the back tires but only an inch deep for the front tires.) I had the back corners of the 9 X 13 cake sticking out after the tires were in place so I trimmed it to fit the shape of the truck and frosted it to match the truck. Wilton tells you to cut the mound off the cake while it is still in the pan so it will sit flat; I used that mound under the front tires and frosted it like the dirt mounds that the cars sit on either side of on the Monster Truck Shows.

The last thing I added was the door handle with a sharp knife and black frosting on the tip.