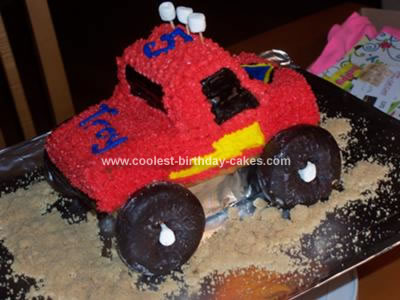 This Monster Truck Cake is a combination of several cakes I saw on this website. I plan to submit a few more pictures to show all the sides and one while under construction. I only used 1 cake box mix which was perfect for the 12 servings that I needed.

I made 2 loaf pans, one was the base of the truck and the other was cut to make the cab/hood. To lift the cake, I wrapped a Jiffy cupcake box in foil and put it under the base cake. It was basically hidden by the tires. This worked very well to give the truck a lift.

I iced the cake with star tips and added a lightning strike on each side. I debated on doing the windows black or white, but decided on tinted windows with black royal frosting. Royal isn’t a necessity, but I had leftover black so it was convenient.

Like many others, I used 4 donuts as the tires and put in mini-marshmallows for the rims. To stick the tires on, I inserted 1/2 of toothpick into the donut and the other end into the cake. I added a bit of royal frosting to glue it on. The mini-marshmallows were also used as cab lights on top. Brown sugar was the dirt below the truck. 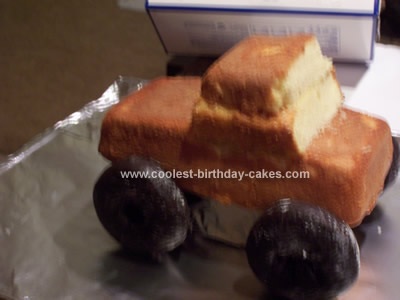 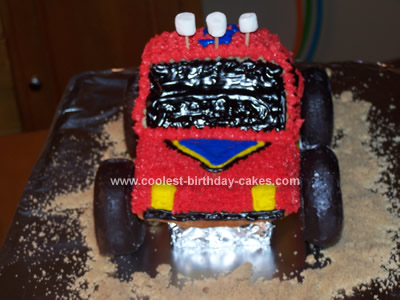 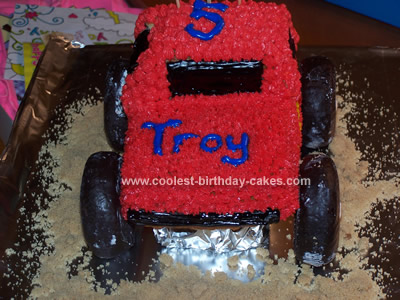