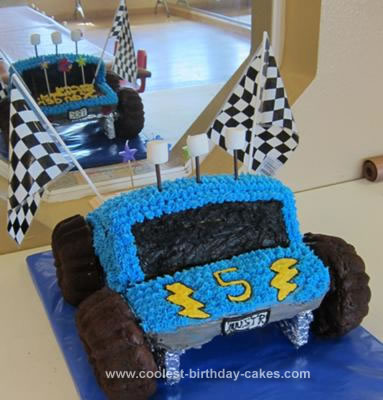 My son wanted a monster truck birthday when he turned 5. So, of course, we had to have a monster truck cake for the occasion! I looked through the pictures on this site to get some ideas. I got some very helpful tips about using a platform and freezing the layer for the cab to make it easier to shape. It definitely would not have turned out as well as it did without these tips. Thank you!

My husband built the wooden platform for the dimensions I needed, based on the pictures I had seen of someone else’s platform. I baked a half sheet cake for the main body of the truck and then a 9” x 13” cake that I froze, stacked, and then carefully cut at an angle with a bread knife to make the cab. I used bamboo skewers to secure the cab to the body, since I didn’t trust that icing would be enough to hold it. I bought a mini bundt cake pan (6-cup) and baked four tires. I used Duncan Hines chocolate/chocolate chip muffin mix for the tires, which is denser than cake but not as dense as brownie mix. They held up very well, even after putting them on and taking them off a few times. Plus, they tasted good without any icing.

I iced all of the cab and main body of the cake with a layer of vanilla icing tinted with blue food coloring, except for the interior of the bed of the truck where I used chocolate icing. I then carefully went over the front, back, and side windows with black icing. I mixed vanilla icing with yellow food coloring and outlined two lightning bolts on the front of the truck along with a number 5. I outlined those with black icing to make them stand out. I put number 5’s on the sides of the truck, too.

I mixed a little black icing with some vanilla icing to make gray for the bumpers in front and back. I used a serrated knife to get the texture I wanted. I made license plates with white and black icing and tail lights with a little bit of red icing. I bought some of the Wilton’s blue icing that comes in a squirt can and used the star tip to do the decorative layer on top. That worked really well and didn’t take nearly as long as I thought it would.

I added some roll bars on the back. I used those chocolate covered cookie sticks (Pocky sticks) that you can find in the ethnic section of most grocery stores or at places like World Market. I used pocky sticks and jumbo marshmallows for the flood lights on top. I added black checkered flags in the back as a finishing touch.

It was a little difficult to transport, but luckily, it made it there with just a few places where the icing needed to be touched up. The cake was definitely a hit at the party. And most importantly, my son loved it! 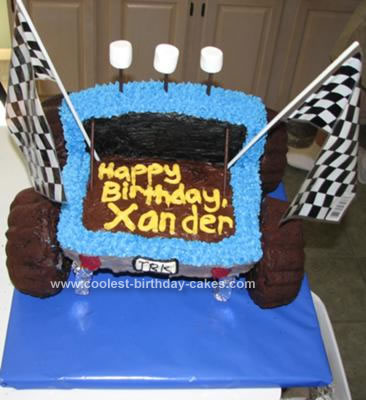 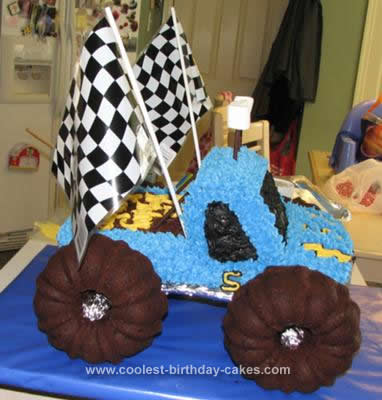