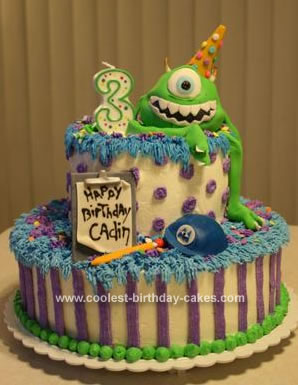 I made this two tiered Monsters Inc. birthday cake for my sister-in-law’s nephew. He loves Mike from Monsters Inc. I used 3″ deep pans, bottom 10″, top 6″. I layered and filled with Bavarian cream. Mike is made out of two large cupcakes stacked.

I froze them and then carved them to the best circle shape I could get. I wanted the birthday boy to be able to have Mike all to himself. Everything is buttercream frosting except for Mike, he’s covered in fondant as are his legs and arms. Even his tiny little fingernails are fondant.

I got the fur idea on this site from Joelle S. from KS. It’s an awesome technique and it really does look like Sulley’s spotted fur. I wanted it to look like Mike stopped work to climb up on top of the cake to join the party so he left his hardhat and clipboard down on the lower level and donned his party hat.

The clipboard, pencil and both hats are made out of gumpaste. I thought it would be cute if Mike wrote the birthday boy a little birthday message on his clipboard. A little tip I learned from scrapbooking is that if you make it look sloppy on purpose the lettering will turn out a lot better. If I would have tried to make the writing nice and neat it would have turned out terrible.

This was one of the most fun cakes I’ve ever made. I love making these little tiered cakes. They really are a big hit at parties and they’re a great canvas for decorating. 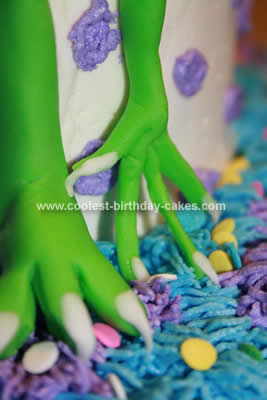 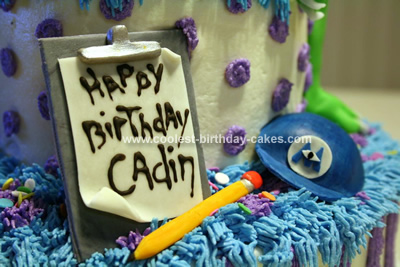 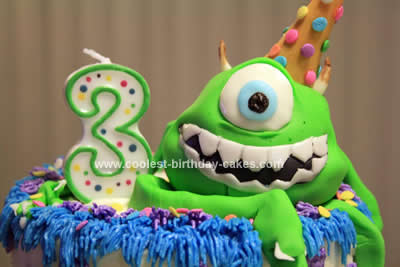