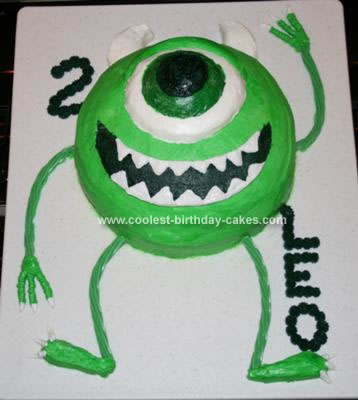 For my son’s 2nd birthday, I wanted to create a “monster” cake because he was so into pretending he was a monster. I was having trouble finding a general monster cake and looked at this site and noticed there was a Monsters, Inc. category. My son loved the movie and I thought I could tweak a few ideas to come up with my own Monsters Inc. Mike Waszowski Birthday Cake.

I combined a number of ideas for other Mike Waszowski cakes from this site. I baked 2 8-9″ rounds, made homemade buttercream frosting, spread a layer of frosting between the two rounds and stacked them. I tinted the majority of the frosting green, left some white and tinted some as dark black as I could make it.

I frosted the double layer cake with a thick layer of green frosting. I then went about getting it as smooth as possible because Mike Waszowski is smooth on the Monsters, Inc. movie. I did this by warming a cup of water in the microwave so it was VERY hot. I dipped the blade of a knife in the water and HELD it there to warm it up. This essentially melted the frosting as I smoothed the blade over the frosted cake. When the knife began to drag I knew it was time to redip the blade.

I used a bowl to lightly press the outline of his one giant eye. I then used a frosting bag and coupler without a tip and piped a tube of frosting on the cake. This was then melted in the same manner as the green “body” part of the cake. I repeated the process with the black.

I cut out a smile from a piece of paper and traced it with a toothpick to have an outline to follow to frost the mouth black first and then added the white teeth on top.

Legs and arms are green Twizzlers with frosting hands/feet and little white claws. I create horns by using the small amount of cake that is necessary to trim the rounds flat before stacking them.

It turned out cute. The birthday boy loved it and it was a hit at the party.