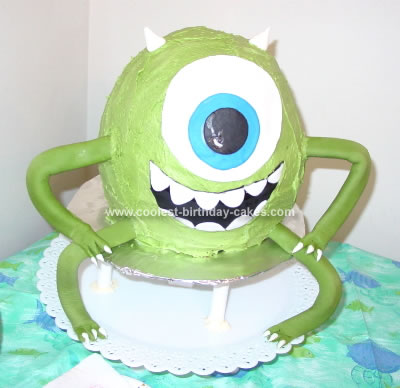 I wanted a 3D version of Mike from Monsters Inc. cake. The entire assembly took shape around the tall tier cake stand/cake plate/with 13.5″ column sold by Wilton. We have used this structure for SO many creations it has proved invaluable.

The only tricky part is centering each layer and cutting the hole in the center of not just the cakes, but any support cake boards needed as well.

I started by making a chair for Mike out of a 12″ cake circle covered with foil. This just sat on top of four 3.5″ plastic cake dowel rods that were “cemented” into place on the cake plate with melted white chocolate.

Then I made 5 layers of cake, each with a single box of cake mix. I followed the advice of a semi-pro baker and after the cake comes out of the oven, wait ten minutes then flatten the “dome” that inevitably raises in the center of the cake by pressing either a foil covered cakeboard, plate or some such flat surface well sprayed with non-stick spray. Leave the flat surface on top with a heavy can on top to keep it level. This really minimizes the amount of trimming/leveling later and makes for a solid yet incredibly moist cake.

The first layer was a 9″ round cake then a thin layer of cherry filling, then a 10″ round cake. I measured and placed 3 supports of plastic dowel rod through both layers before placing an 8″ cake circle covered with foil for support. On top of that I layered another 10″ round, a layer of chocolate icing, a 9″ round, another thin layer of chocolate icing, then topped it all off with a dome made from the Wilton soccer ball cake mold.

It only took minimal sculpting and trimming to get a nice egg shape. Frosting it was not difficult, but it sure worked my shoulder muscles. Vertically frosting a cake is not tricky, just different. I first filled in the areas between layers and waited 15 minutes for that to stiffen a tiny bit, then I meticulously covered the entire surface with green tinted frosting. I prefer an angled long cake spatula and worked from the bottom up. We used Wilton’s leaf green and moss green blended together to get a good primary shade.

I rolled out the white fondant and cut out a large circle for the outer eyeball. I believe I used a large cereal bowl for my guide. I rolled out the black fondant and cut a smile shaped piece and then laid out the rolled white on top to shape teeth that matched the curve of the black mouth. A small circle was cut out of the blue rolled fondant, and a smaller circle was cut out of the remaining black fondant. I wet the edges and joined the eyeball layers together then placed it on the head. The teeth were wetted then placed on the mouth being careful not to smear any black coloring from the mouth to the white areas. Keep LOTS of paper towel handy. The mouth was placed, and then I sculpted 2 triangular horns from the remaining white fondant and put these on the top of the head. I made little ridges on the horns with a toothpick.

Making the arms and legs took some thought but we hit upon the solution by sheer coincidence. We took my son to the Rainforest cafe for his birthday lunch and afterwards he bought a gummy snake. Luckily I bought a second one for a treat later because when I thought about it, the gummy snake was the perfect solution.

I cut four pieces to be the limbs, each one approximately 8-9″ long. I put a wooden skewer about 4″ into the center of each limb and then covered each one with rolled green fondant, wetting the edge lightly to seal them together. After snipping the very edges into 3 “toes” I inserted the skewers into the egg at arm and leg level and made appropriate folds, finishing each “toe” off with a little white toenail. The gummy inside the fondant stayed very flexible and made the perfect material for shaping the limbs. I foresee many other uses for the gummy snakes in my future cake designs, jumpropes, antennae, tentacles, etc. 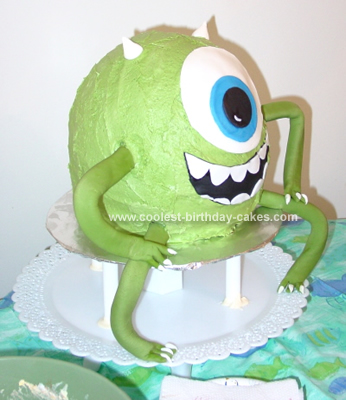 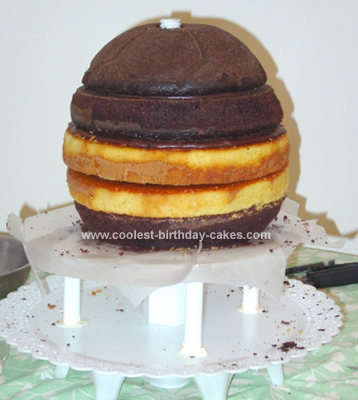