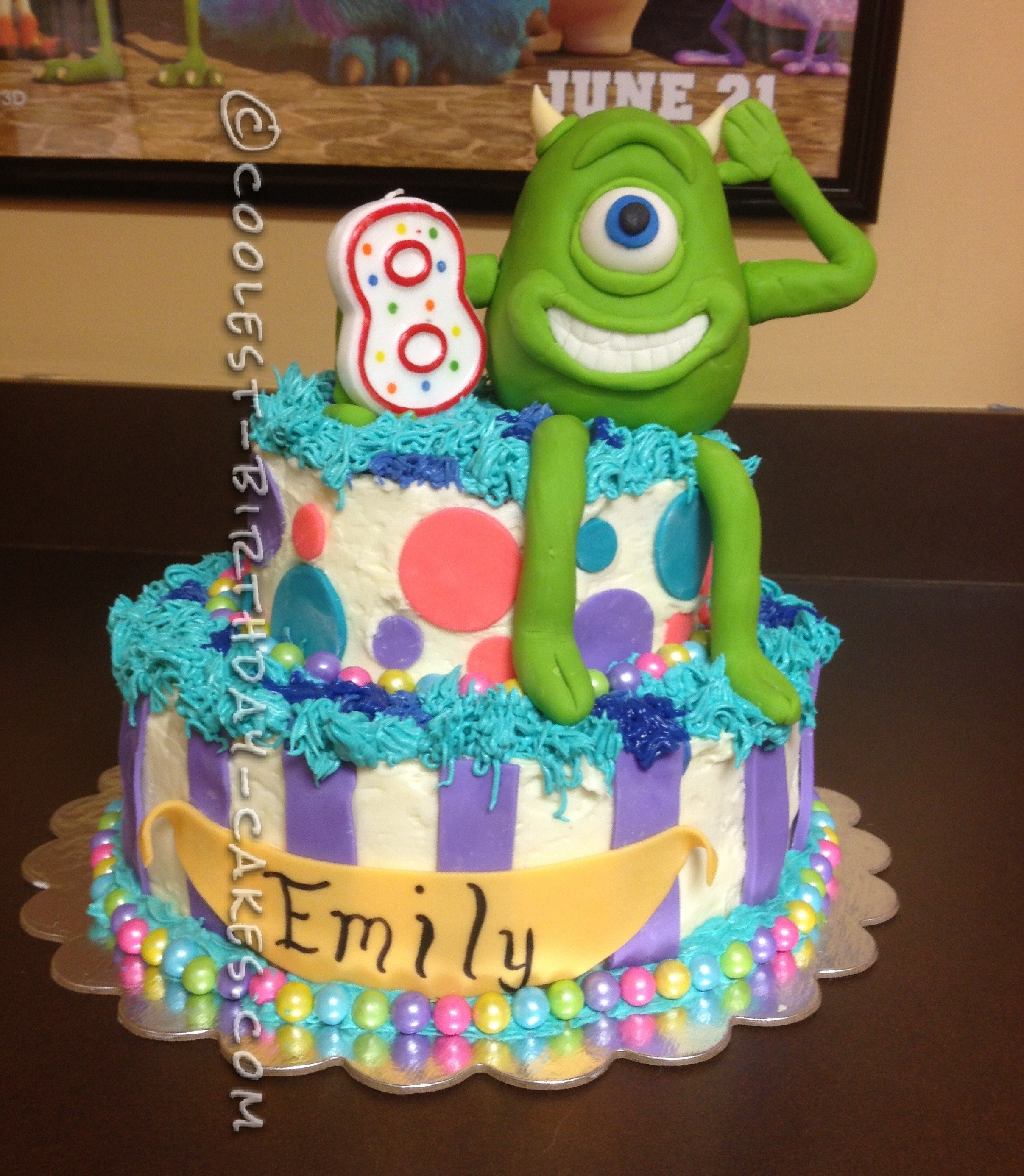 As soon as we knew that Monsters University was opening the weekend of my daughter’s 8th birthday, we knew we would be having a MU party at the theater.  Once that was decided, the next order of business was the cake!  We went through a few  ideas before we settled on a two tier cake with Mike Wazowski perched on top!

Once I had that established and the birthday girl requested a lemon cake I started firming up the design.To add more visual interest and more “Sulley-ness” I decided to dye the cake batter teal and purple and make the inside of the cake striped.To accomplish this, I would pour 2 tablespoons of batter from each color at a time in the center of the round cake pan. I would then repeat with the alternating color. As more batter was added into the cake pan, gravity would do the rest of the work and the batter would spread. It is critical to resist the temptation of tapping or leveling the batter in the pan. I made 2 8-inch cakes and 2 6-inch cakes for the 2 tiers.

The night before we assembled the cake, we used Rice Krispie treats to make our Mike shape. We pressed the Rice Krispies to make it compact and used the back of a round measuring spoon to make an indentation for his eye socket. We stuck him in the freezer overnight to harden the marshmallow.

The next morning I began to assemble the cakes. After leveling the cakes and inserting straws in the bottom layer for support, I iced the cakes with white lemon butter cream. I then added “Sulley fur” to the top of each tier using teal and purple icing and the “grass tip.” I was nervous about the butter cream being stiff enough but even where it laid over it made it look even more like fur. Because the MU colors are typically more “boy like” in my daughter’s opinion, we added pink, teal and purple dots and purple stripes with fondant and pastel colored sixlets around the bottom of each tier to make it a little more “girly”.

To make Mike, we covered the Rice Krispies in green fondant and kept massaging it until it was smooth. We didn’t want a Kelly green so mixed yellow with a little green to get the color right. A very small amount of yellow was added to the fondant for the bone like color for the horns. A partial ball was used for Mike’s eyeball and the other eye elements were added. From there my husband played around with the fondant to get the eyelids, cheeks and mouth just right.  He wrapped fondant around skewers to make the arms and legs and one final skewer was used to attach Mike to the cake.

As we entered the theater, the cake caught the eyes of many people – patrons and workers alike. The teal and purple stripes on the inside were a surprise to the guests and caused a second surprise when they discovered the flavor was lemon! It sure didn’t look like a lemon cake! But the most important opinion was our daughter’s – she thought it was SCREAM-AZING! 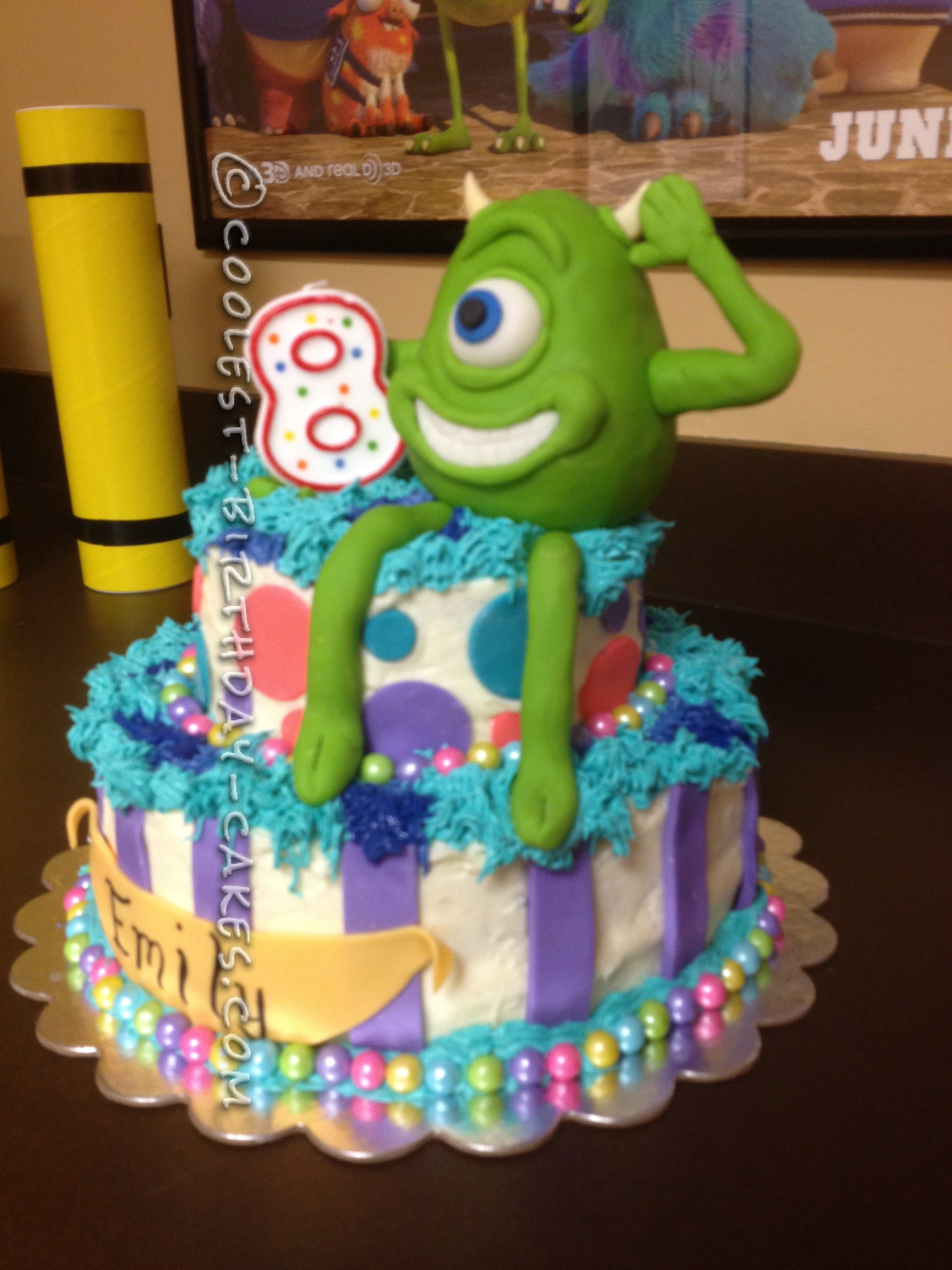 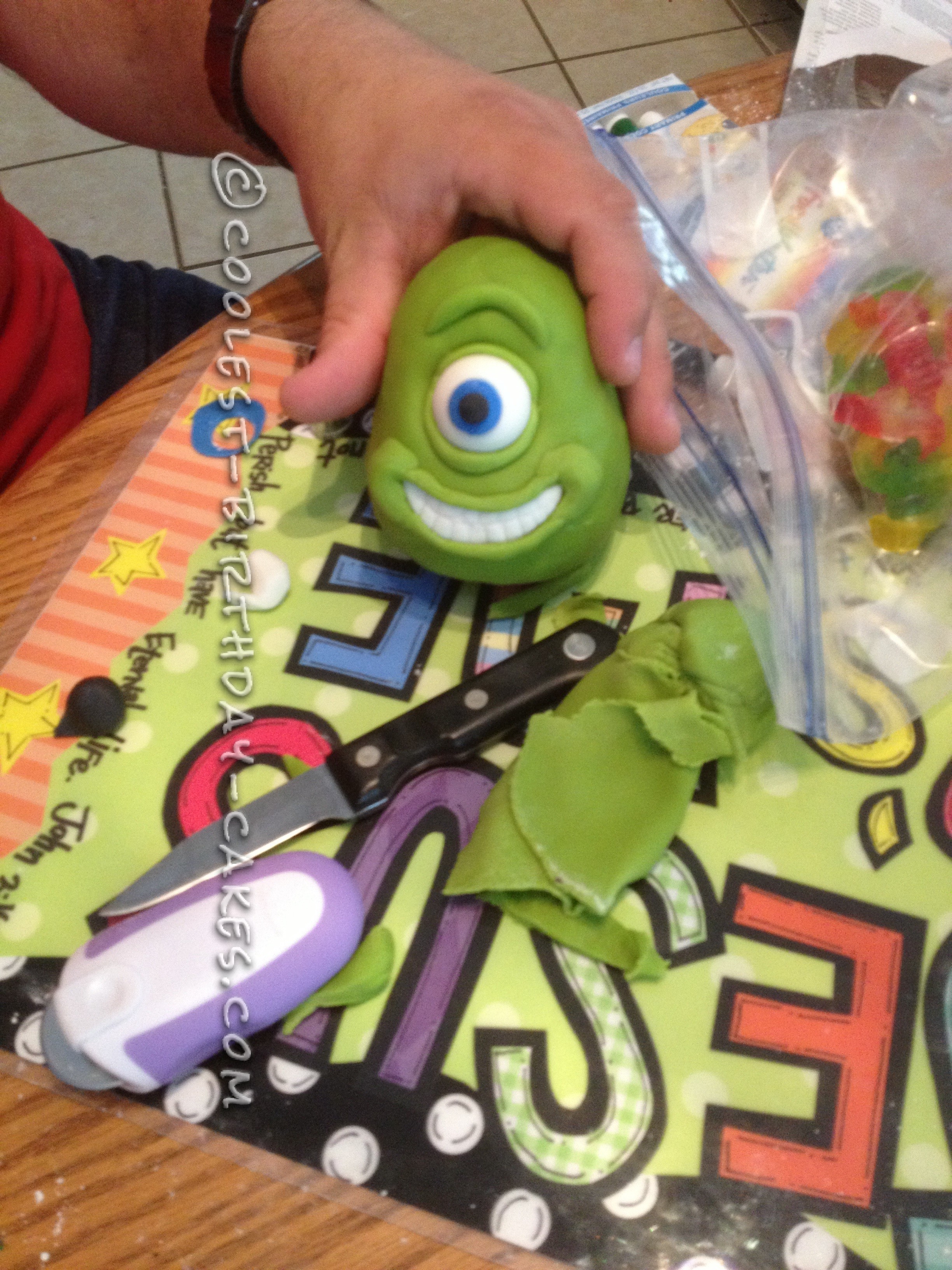 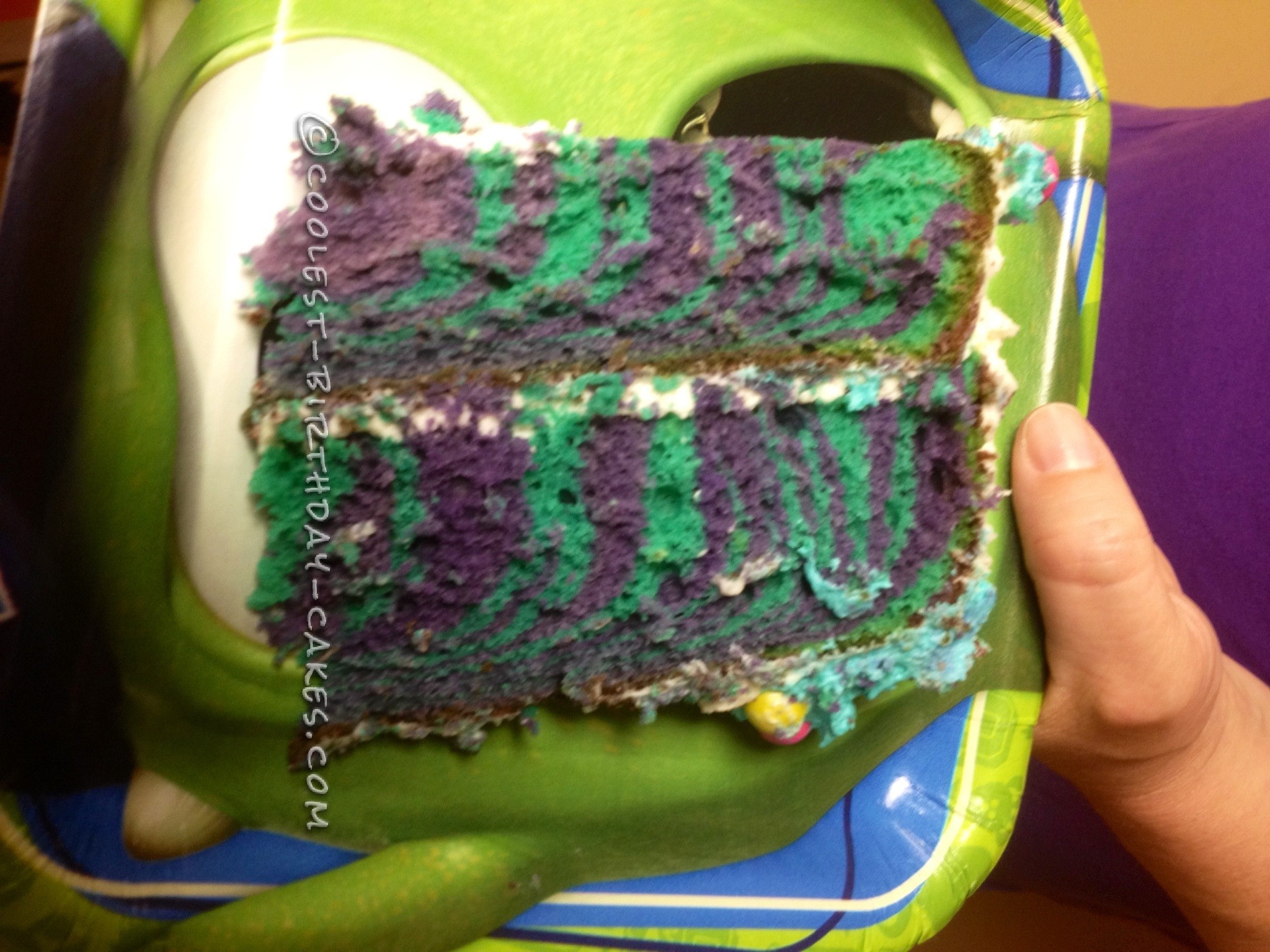 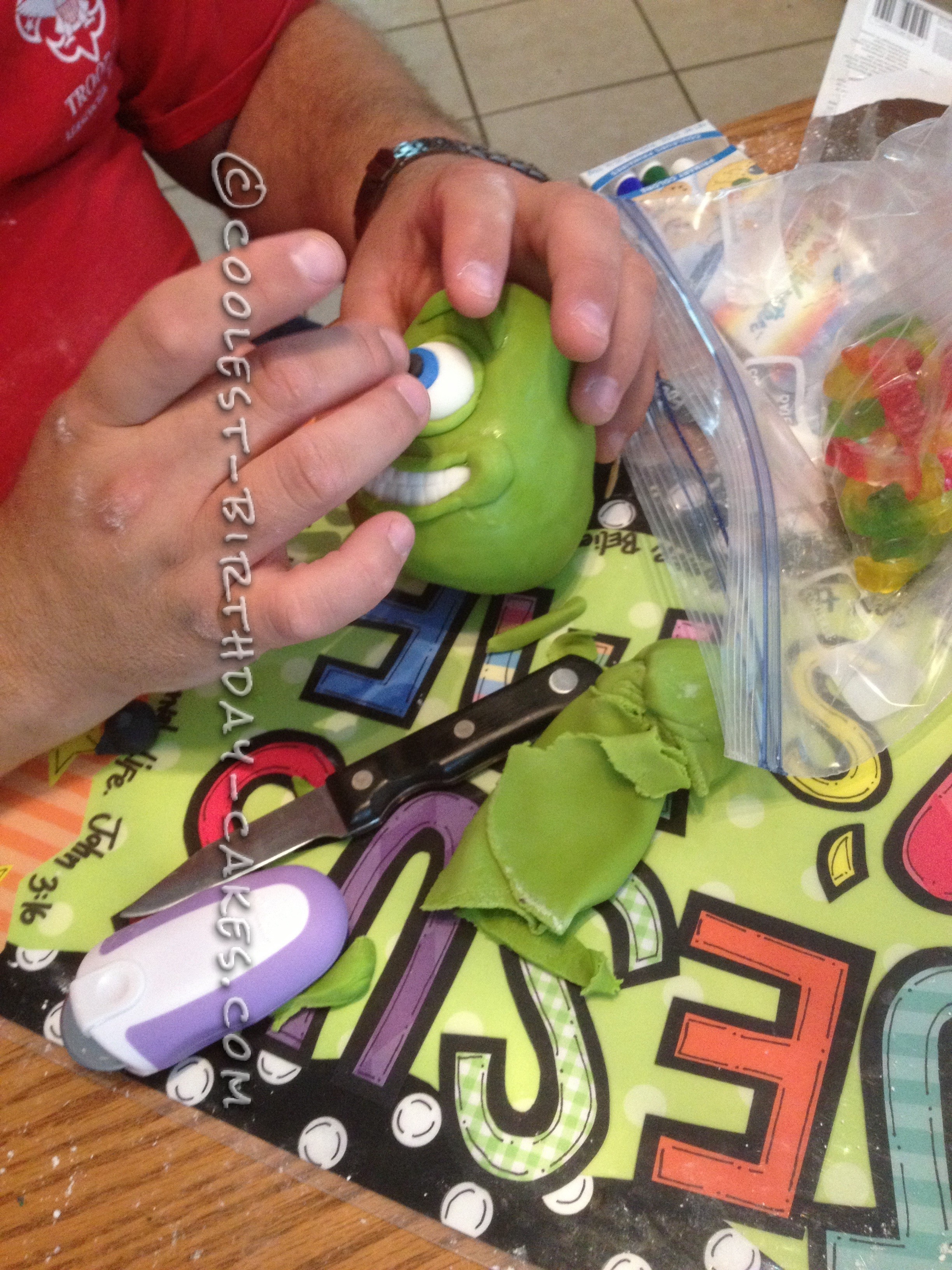 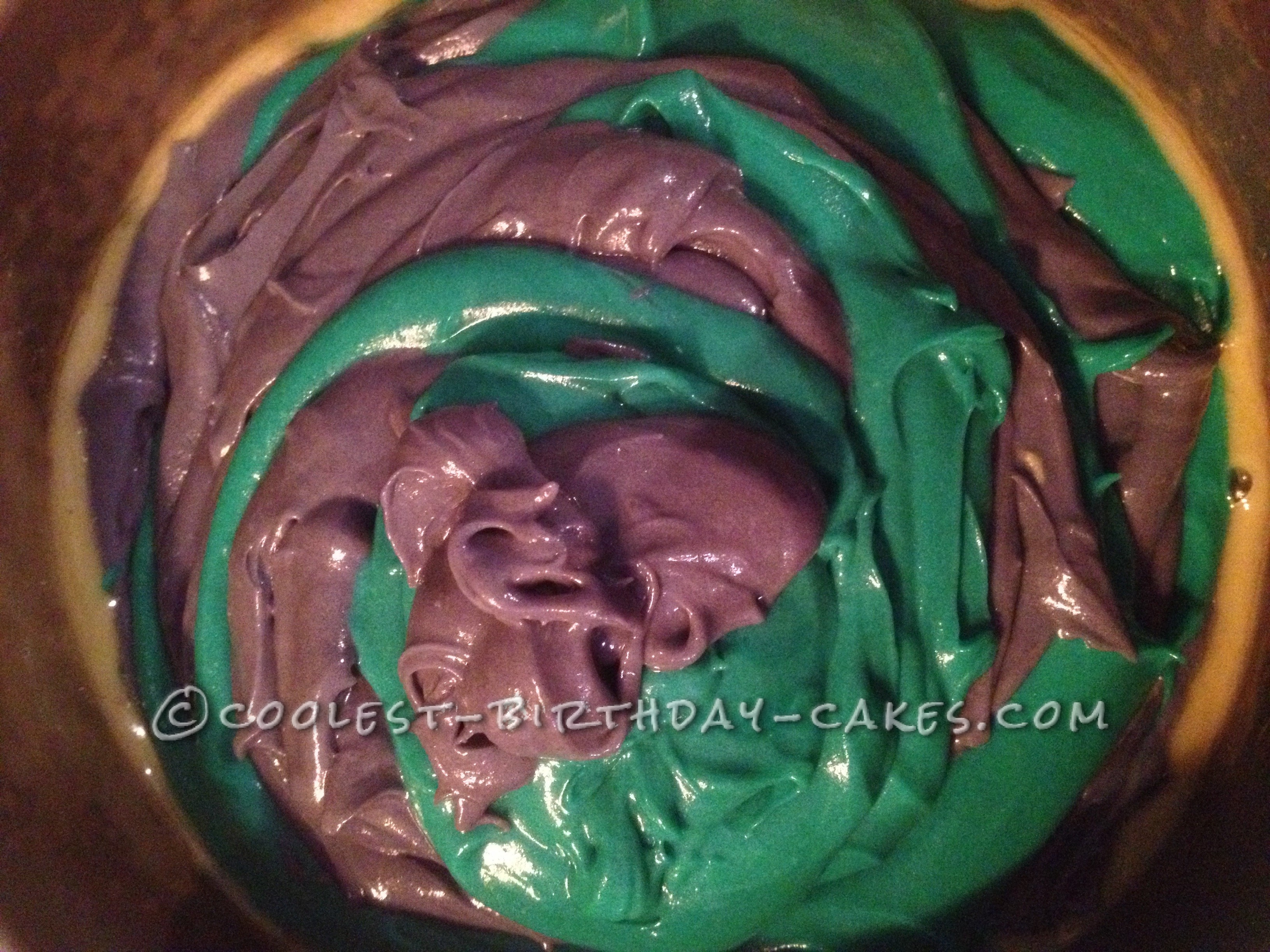 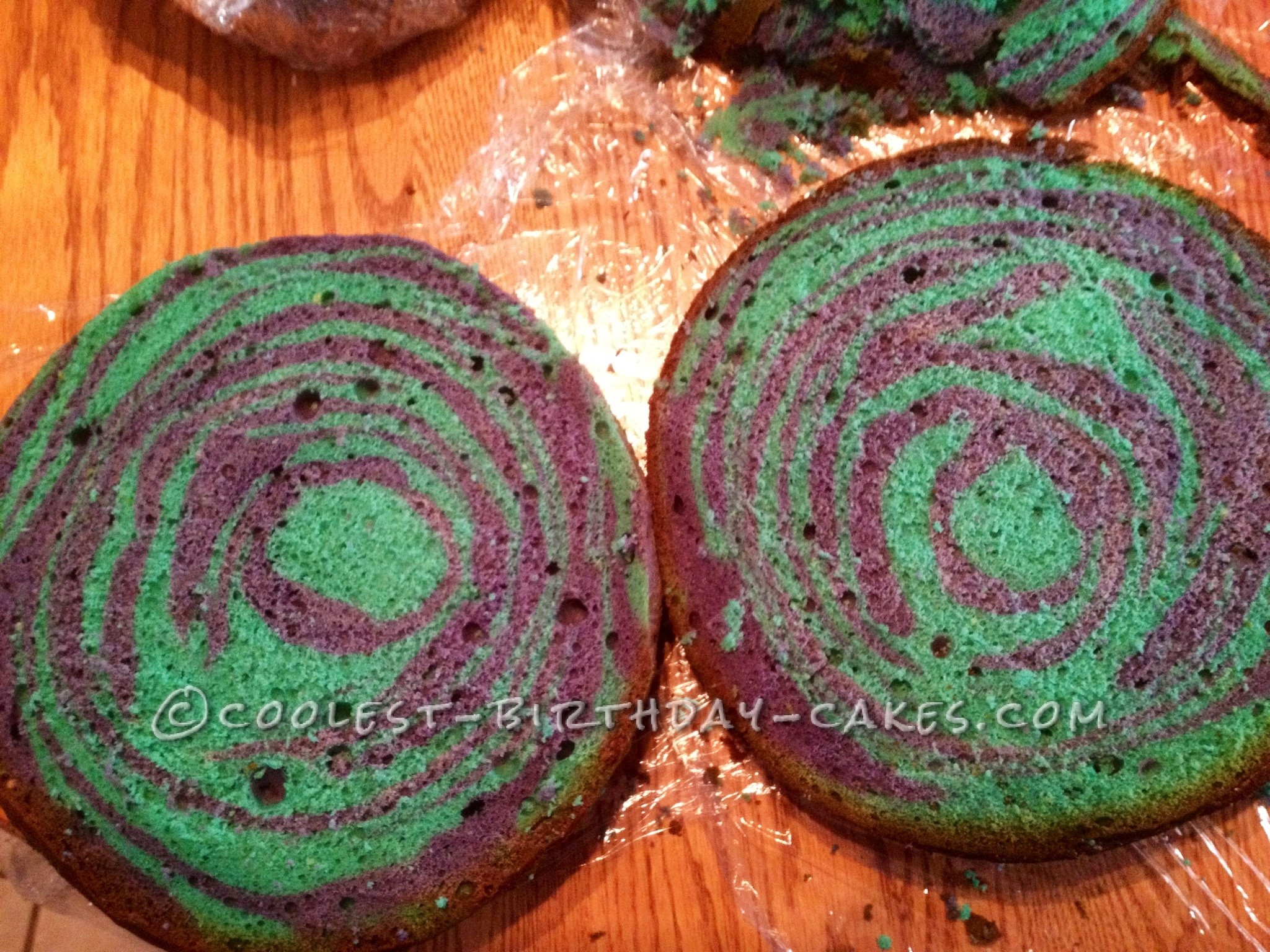