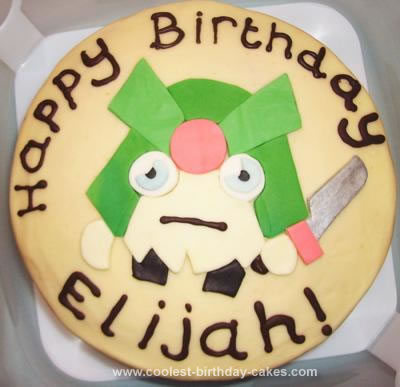 Having failed at two attempts to create a General Fuzuki royal icing run out transfer for the cake, I resorted to using roll out sugar paste.

The sponge cake is a very simple Victoria sandwich recipe. The recipe requires 4 eggs, 8 oz of margarine, caster sugar, flour and a few drops of vanilla extract. Place the mixture into two lined round cake tins at gas 3 for about 30 – 40 minutes until golden. Leave to cool completely before icing.

I used vanilla butter icing and Damson jam to sandwich the two cakes together and then used the remaining butter icing to crumb coat it until dry. I then covered the cake in a thick layer of butter icing and used a paper napkin to smooth the creases when it crusted over. You can of course use sugar paste to cover the cake but we prefer the taste of butter icing.

To make General Fuzuki, I colored some sugar paste and used a template to cut out the body, helmet, jewel, sword, legs, hands and eyes. The pieces were then assembled on top of the cake and the mouth was piped with chocolate. Birthday message was also piped with chocolate.

As a joke, I presented the cracked run outs as my child’s General Fuzuki cake expecting him to be disappointed but he wanted to keep them! Anyway, he was delighted with the Moshi Monsters General Fuzuki birthday cake itself and insisted on cutting round General Fuzuki so that he lasts!