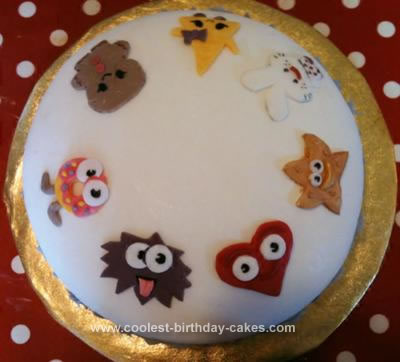 My daughter and her friends are crazy about Moshi Monsters Moshlings so I made this Moshling cake for her seventh birthday. There seem to be hundreds of different Moshling characters, so I spent quite a long time planning and working out which ones would be easiest to make but still look good on the cake!

The cake is a two layer sponge covered with a layer of buttercream and then rolled white fondant. The seven Moshling figures are made from rolled fondant. I coloured the fondant with paste colouring, except for the gold Moshling which is made from white fondant painted with gold lustre powder mixed with vanilla extract.

I put the basic ‘body’ shapes onto the cake first before adding the eyes, feet and other details. The heart-shaped figure and the donut figure were made using a heart-shaped cutter and a round cutter. To make the rest of the figures I printed out pictures from the internet, cut them out and used them as stencils, laying each picture on top of rolled-out fondant and drawing around it with an edible decoration pen. I then cut each figure out of the fondant using some very sharp craft scissors – I find this easier than using a knife when cutting detailed shapes and it gives cleaner lines.

I used a piping tip as a cutter to cut the white circles for eyes and to cut out the inside of the donut. I then used the pointed end of the piping tip to cut out tiny fondant dots to make the sprinkles for the donut – this was quicker and easier than piping dots on, because I already had the coloured fondant to hand. The black pupils on the eyes are drawn on using an edible decoration pen. I used strawberry laces for some of the smiles.

Later I put the candles in a circle in a centre of the cake.