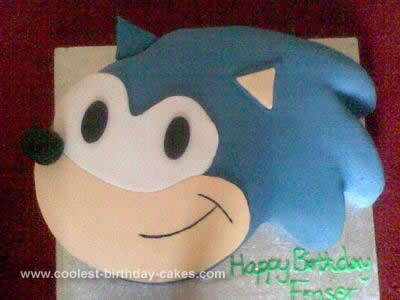 I made this Sonic the Hedgehog Birthday Cake by using a basic sponge recipe. I used 6 eggs, 350g self raising flour, caster sugar and margarine. Dividing this mixture between two 12″ round cake tins. I then repeated the mixture placing it into a 10’’ by 12’’ cake tin. I drew round the cake tin and from that was able to work out and draw a template for Sonic’s spikes, ensuring they would be in proportion with the head.

I began by using my template to cut out two lots of Sonic’s spikes from the rectangle cake so that it would be a two layered cake. I spread a layer of butter icing to sandwich the cakes together then I covered both cakes in butter icing. I was then was able to stick the spikes to the side of the round cake ready for it to be covered in sugar paste.

I coloured some white sugar paste blue, gradually adding the food paste until I achieved the desired colour. I prefer using the food paste as it is less sticky and gives a stronger colour. I rolled out the sugar paste larger than I needed and carefully covered the whole of the cake; this was fairly tricky given the size and shape of the cake! I cut the excess cake using a sharp knife as close to the cake as I could (normally I would tuck the icing under the cake to give a neater finish but the cake was too large for my turntable)! Then I smoothed all over the cake using a cake smoother, this helped the cake to look neater and to push the icing into the spikes making them more prominent.

Using my template of the round tin I was able to draw and cut out a rough template for Sonic’s mouth. I coloured some sugar paste a cream colour. It took a few attempts to get the correct shape I was after. I repeated this process for Sonic’s eyes making sure they fitted neatly into Sonic’s mouth. These were applied to the cake using sugar glue.

I coloured a small quantity of sugar paste black for Sonic’s eyes and nose. I rolled out a slightly squashed ball shape for the nose and used an oval cutter for the eyes. Sonic’s mouth was drawn on using an edible pen. I cut out triangle shapes for the ears; the outside one was just blue held in place with a small cocktail stick. The inside ear had a smaller cream triangle on top of the blue one. Everything was stuck on with sugar glue.

I am really pleased with how this cake turned out.