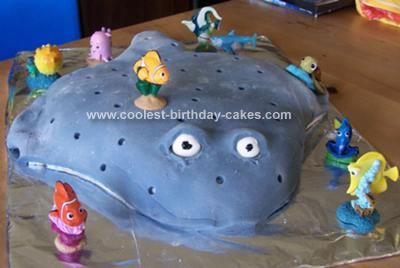 For my daughter’s 2 year birthday party she wanted Nemo. She really liked the part when Nemo went to school. So I thought that a homemade Mr. Ray from Finding Nemo birthday cake would be best.

I used an 11×15 inch Wilton cake pan. This pan holds 2 cake mixes. I used a yellow mix and a chocolate mix then added chocolate chips. I cut out the pattern for the sting ray and placed it on top of the cake. Then I cut the cut to the pattern.

The cake had a chocolate buttercream filling and was crumb coated with the same buttercream. Then I rolled out 2 sections of fondant. One I left white to be the underside and the white that comes through for the dots. I then tinted the other section of fondant with Wilton’s tinting gel. I used black and royal blue.

Then I made 2 round balls of white fondant for the eyes and placed them on the head then covered the cake with the black fondant. I cut the eyes out and then painted the black part of the eye with more tinting gel. To get the dots on the cake I used a straw to form the circles. The figurines I found at the Disney Store.