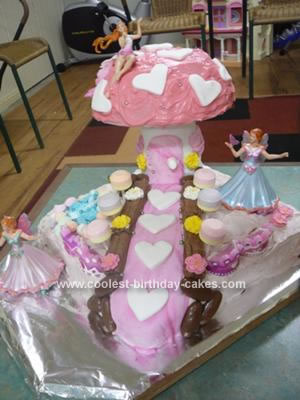 I saw a mushroom fairy house in a cake book and thought I wouldn’t be able to master it, so I came up with this Fairy Toadstool Cake idea. My little girl loves fairies.

I cooked a 30cm square butter cake and a white mud cake in a steel mixing bowl that was going to be about the right size. (A pudding steamer would be OK). The cakes were just packet cakes from Woolworths.

After the cakes had cooled, this is how I constructed it.

1. Push the glass into the back corner of the cake, leave it in about an inch from each side.

2. Roll some ready made icing (in white) and cover the glass. It doesn’t matter if it is rough because a mushroom stem is rough anyway.

3. Cover the main cake with butter icing (I made mine a lilac colour to match one of the fairies).

4. Decorate the mushroom stem with a door and windows from ready made icing again. I rolled some pink colour into it, but left it marbled. I used this for the door, windows and path. The windows were cut with a heart shaped cutter and had a cross on it to make it look like the windows. I just cut a shape out for the door and put a small white marshmallow on it for the door handle.

5. Cut a path from the pink icing (I made it a wedge shape to make it look wider.) I made the path go over the edge of the cake.

6. Line the path with Flakes (like logs). Put icing flowers on the log, cement them on with a little bit of butter icing. I put some cashews up the edge of the path to look like fairy lights. Where the logs didn’t meet the house or end of the path, I filled it in with Clinkers to look like rocks.

7. Along the edge of the path I put lollipops for trees or standard rose bushes.

8. On the left I constructed a pond from sherbet lollies in the shape I wanted.

9. I got some blue hard boiled lollies and crushed them inside a plastic bag with a rolling pin, and filled up the pond.

10. I placed the plastic fairies into position.

12. Cut some hearts from the white ready made icing and place at random over the top of the mushroom, and some others for stepping stones up the path.

13. Put some cashews on the top of the cake at random.

14. The candles were crowns and I put two of them either side of the path to create a fence.

15. I had a small toy frog (actually a magnet) that I put near the pond. 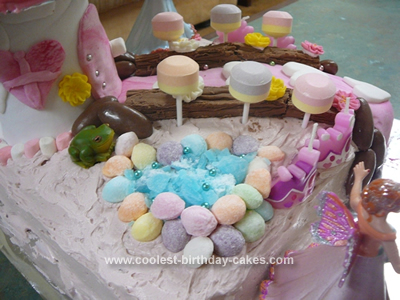 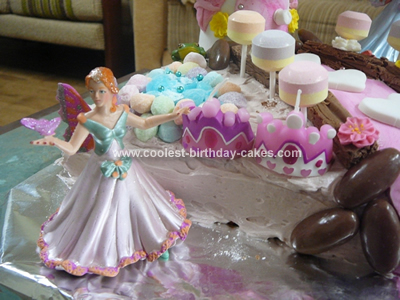 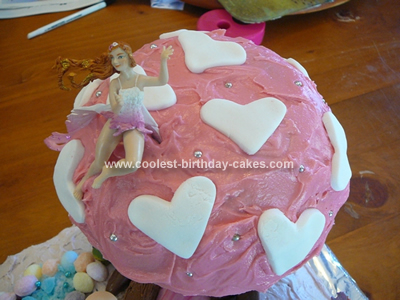 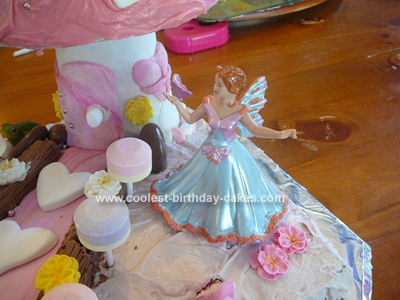