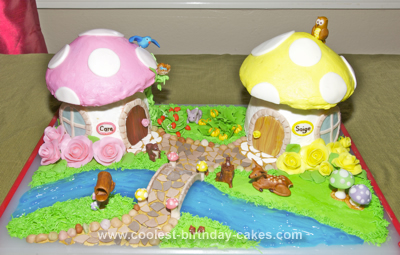 This Homemade Woodland Mushroom Twins Cake was for a Baby shower for twin girls. The theme for the Shower and nursery is woodland and fairies. I used the giant cupcake pan for the cakes, turned the base upside down, shaved off the ridges and as a hidden treat, hollowed out some of the middle to stuff with Strawberries. Everything is edible; using a combination of fondant, buttercream, sugar candies and piping gel. Taking some advice I found online to use the giant cupcake pans, I “densed” up my usual cake recipe by adding an additional egg, using milk instead of water, and reducing the old by a couple tablespoons. Also, I always add a box of instant pudding mix to my cakes (the best for moisture and creamy flavor) and it adds enough moisture that you can bake the cakes the day prior, frost them, and still have that fresh baked taste the following day.

I prefer to only use fondant for decorations and use a crusting buttercream which, after frosting, can be smoothed down using a non-print paper towel which is how I achieved the smoothness on the tops of the mushroom caps and then left the edges rough like a mushroom can be. Decorations which are less likely to be eaten can be make a week or two in advance and kept in a container. In this cake, I made several elements in advance and allowed them to air dry so they would be plenty firm. For example, the bridge was made a week ahead and dried 48 hrs with a support underneath. That way it wouldn’t sag. It works great for animals too since you can dry them with supports under chins to keep their heads up, or in the case of the bird with a couple dowels under the wings until dry enough.

I always make my flowers last as they have thin petals and they become too brittle and break too easily during assembly. However, the leaves seem best to make ahead (tip: when drying leaves allow them to dry on a really bumpy surface so that they get some natural bends and curl – put some plastic wrap over small pebbles or glass beads and make sure to curl up some of the ends and sides. For curly vines, dry fondant strings wrapped around toothpick or skewer. 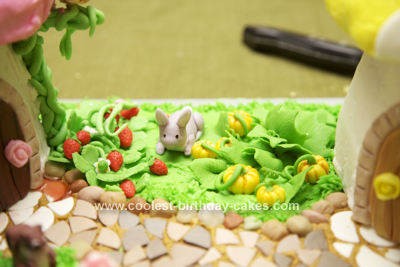 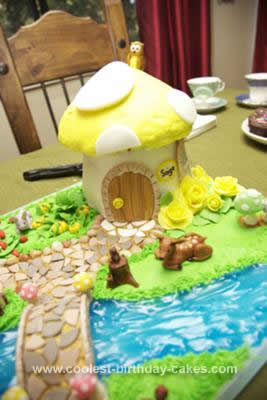 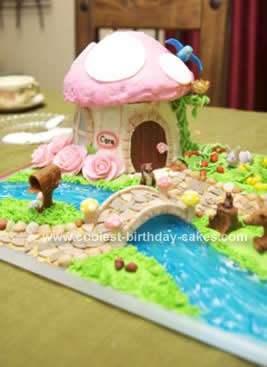