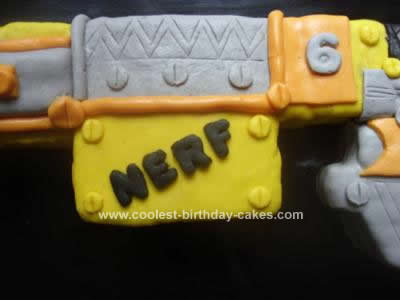 My friend asked me to do a cake for her son who is Nerf Gun Mad! so I asked him to bring his favourite gun around and from there I drew a life sized template for his Homemade Nerf Gun Cake. Then from the template I worked out how much cake I needed. I made 3 x 7inch chocolate sponge cakes sandwiched together with chocolate butter cream. A lot of cake I know but nessasary for cutting out the different parts of the gun.

Once the sponges were made I left them to chill in the fridge for an hour to make them easier to cut without crumbling. I focused on the general shape at this stage and started with the barrel of the gun, this measures 22cm x 6cm.

I then cut the main part of the gun which is a full 7inch cake cut down to 11cm wide at the front and with a square on the right hand side cut out that is 6cm x 6cm, this is where the trigger hole is. From the off cuts I extended the back of the gun 9cm long by 7cm wide.

I finally cut a square 9cm wide by 11cm long and shaped it to form the trigger handle. All the pieces were then put roughly in place but not yet stuck as it is easier to ice the parts separately.

I started with the main colour of the gun (yellow) and then iced the other parts and once the main shapes were iced then stuck them together with a little butter cream.

I started to add the detail of the gun and cut into the icing using a sharp knife. I then cut out letters with a letter cutting set and stuck them on.

I rolled long sausage like shapes and added these to the barrel of the gun to tidy up the edges of where the different colours joined and finally from the off cuts made small circles and scored them down the middle to look like screws. These were then placed at the points on the gun as they are on the toy one. The gun was then complete.

From start to finish including baking this cake took around 4 hours to make but was well worth the effort when I saw my friends little boy’s face light up plus there are lots of off cuts to have with a cup of tea when you are done. 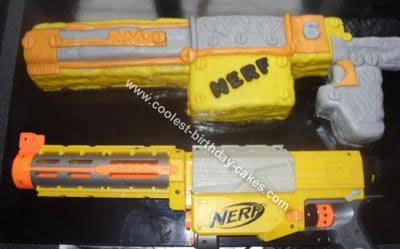 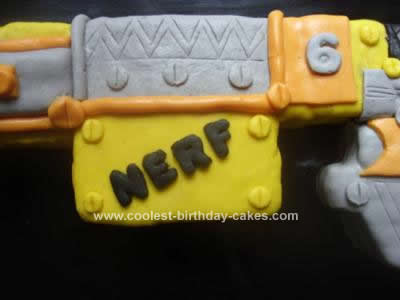