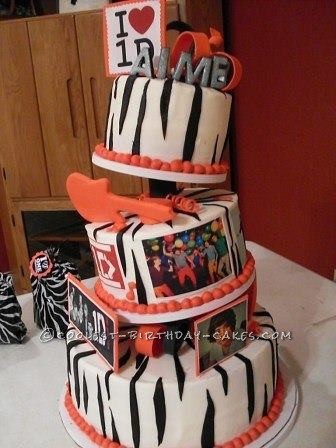 This is a “One Direction” birthday cake that I make for my daughter. I used a special stand that holds the plates slanted. The sizes where a 14″ round for the bottom, in the middle was a 10″ round and the top was an 8″ round. The cakes were filled and covered with butter cream. The zebra stripes where made of fondant.

I used edible images to make the plaques with the group’s pictures. I simply rolled out fondant cut the right size and shape, used piping gel to stick the picture on and then inserted toothpicks to later (after it dried hard) insert the plaque into the cake. The guitars were also premade the same way except that I used a cookie cutter to cut the shape. The curlies where made by simply wrapping a long narrow piece of fondant around a straw until it dried, then I pulled the straw out. This cake was easy to make yet so visually  impressing.