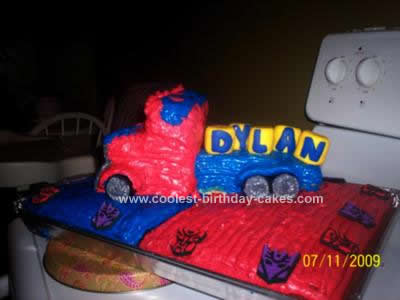 My son had a Transformers theme for his 9th birthday, so I made him this Optimus Prime Birthday Cake. I started out with 3- 9 x 12 inch cakes, 2 for the bottom to make a large sheet, and one to form the semi. First I iced the sheet, half red, half blue (with buttercream icing I had whipped up a huge batch of the night before to let the colors set).

Then I just stared cutting and icing to form the basic look of the semi. Then I started with the red on the semi, and kept putting it in the freezer every 10 mins to get the look I wanted and make it easier to work with. Once the red was all done, I went back with the blue, to do the back of the semi, and the details on the front.

I drew the flames by hand, practicing first on a piece of paper. The tires were marshmallows iced with black/grey. I had bought a small box of fondant in basic colors, but there was obviously not enough to do much, especially not on a cake that size, so I decided to use it for my sons name on the trailer. I rolled out the yellow, and wrapped it around marshmallows, then rolled out the blue and hand cut the letters.

The Autobot/Decepticon signs around the sheet cake I happened to find at the dollar store. The only problem was that to achieve the shiny, smooth texture I had wanted, using a buttercream, was that I used a lot of butter and freezing to do it…And it was summer, so the icing did start sliding off the cake a little by the time we ate it! But my son loved it! 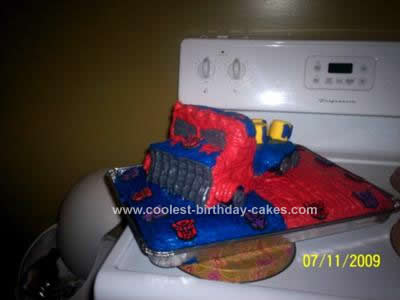