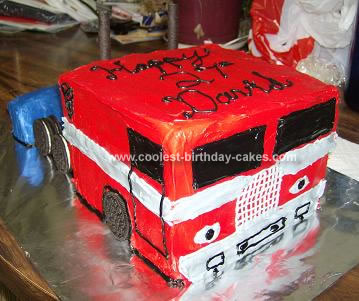 My husband is a huge Transformers fan, so I decided to make him an Optimus Prime Birthday Cake for his 27th birthday. I opted for the version from the 80’s cartoons, which he grew up with, and was much easier to make, in my opinion!

I made 4 8×8 cakes using 4 boxed cake mixes in French vanilla flavor, and added 1 T. of cinnamon to each cake mix (my husband loves cinnamon, and it came out delicious!). After cooling thoroughly in the freezer for a while, I leveled each cake and stacked 3 of them using caramel icing between each layer. I carefully shaved off around each edge, making it as square as I could get it.

While the cakes were in the freezer, I colored my frostings and got ready to decorate. For the red, I mixed 1 can of creamy vanilla frosting and 1 little bottle of the Wilton’s red (no taste) food coloring. For the deep red, I had to use the whole bottle of coloring. I’ve found it’s the only way to get that dark red, and not “pink”. I then colored another can of vanilla frosting blue with about 1/2 bottle of Wilton’s royal blue food coloring.

I took the cakes out of the freezer, covered the “cab” section red and the “flatbed” section blue, assembled them together on a cake board, and put them in the fridge to harden a little. During this time, I made some royal icing using egg white and powdered sugar. I mixed in a little of the Wilton’s black food coloring to make a light gray for the details on the truck.

I filled one piping bag with the amount of gray I needed, then added the rest of the bottle of black food coloring to the remaining icing to make dark black. I then took the cake out of the fridge and drew the details onto the truck using piping bags. For the smoke stacks, I used Oreo cookie straws, and for the wheels I used Oreo cookies (1 on each side in the front, and 2 “glued” to each other for each back wheel. For the finishing touch, I wrote out “Happy 27th David” for my husband on top.

This was a fairly easy cake to make, compared to some others I’ve had to make, but it was still somewhat of a challenge. We’re visiting family out of state, so I had to find my way around a new kitchen and figure out what they already had/didn’t have, as well as try to keep my husband & 3-yr-old out of the kitchen! He loved it, and was really surprised, as were the rest of his family. 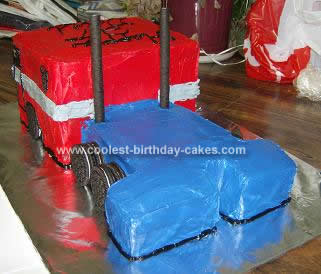 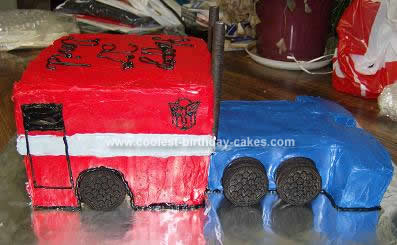