My grandson wanted a Pacific Rim Cake – I had no idea what one looked like so searched the Internet and did not find much.  So just printed out some pictures and away I went.

I made the “house” with fondant- adding green and brown to get desired effect. Cut out shapes, put on details then left them to harden – 2 weeks.  Made the attachments for the house at the same time. Then started on the figures – build them up bit by bit. The main figure is supported by candy sticks and the smaller by bamboo sticks. Made them 2 weeks before hand to enable them to harden – used dry spaghetti and edible glue to hold figures together.

Once figures had  hardened I painted on the silver with a silver twist brush and sprayed both figures with edible glaze spray – made the details stand out more. Figures ended up different to what I had planned – that is what happens as you make items for a cake and are still learning.

Butter cream icing formed the sea and the house sides were attached by the butter icing. Assembled the cake (made 2 chocolate cakes) the day before the party and put the figures on just before the cake was presented – they were quite heavy and I was concerned they might break. Proped the back of each figure with blue coloured chop sticks.

My grandson loved his Pacific Rim cake and that made the effort well worth while. 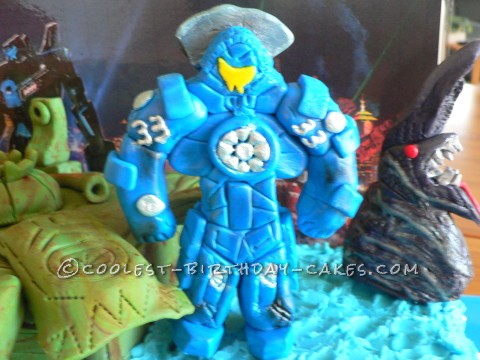 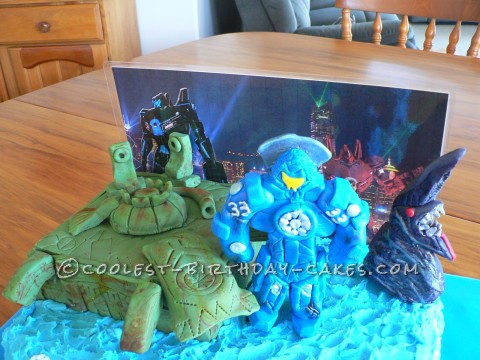