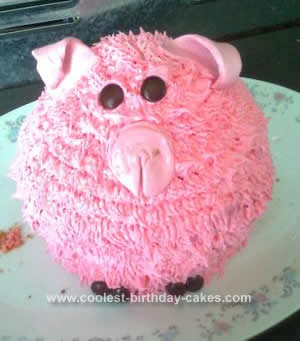 This Pig birthday cake was made for my niece’s birthday because she’s obsessed with pigs. I made it using the big cupcake pan you buy in stores. The only difficulty I had was putting the two parts together once it was baked (top and bottom).

For this cake you need the obvious cake mix (I used strawberry), frosting, I used white with food coloring, a big cupcake cake pan, laffy taffy( for snout and ears), and Reese’s pieces for toes and eyes or M&M’s.

After I assembled the big cupcake cake I started to frost it using the star tip from the bottom to the top. Because it takes so long to frost the whole thing I took beakers sticking it in the freezer so it wouldn’t melt.

The ears and snout from laffy taffy, you could use marshmallows instead. I cut the ears from triangles and curved them to look like they were folded over, and the snout was a circle cut out but slit in half to the middle to make it loo like a real snout. I should have put dots on the snout to look like nostrils.

Overall this cake took a lot of time but was simple and fun to make and her reaction made it all worth it in the end.