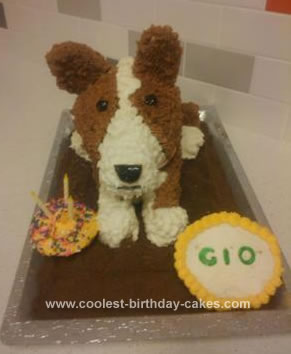 What you need for this dog cake:

4 boxes of white cake mix made with eggs, not egg whites and a little less water (the dog).

1 box Chocolate Fudge cake mix made with 4 eggs whites and less water than called for (the base).

Black Writing Gel (for the eyes and nose)

A Round Cake Pan

I used the loaf pan for the body, the ball pan for the head and the little round name sign, made the paws- legs- tail-ears out of the round pan, the snout and cupcake was made from the cupcake pan and finally- the base of the cake was a sheet cake.

After I baked all the cakes, I put them in the freezer so they would be easier to carve. I trimmed the roundness off the ball halves and saved the best cut for the “Gio” sign. Then I carved off a little of the sides of the dog body to make the shoulders and butt rounder and took in the sides a bit. I measured (by finger method) the side of loaf cake and cut the hind legs, front legs, ears and tail free hand (using the round cake).

After cutting out the pieces, I dirty iced the base and added the loaf piece. Then attached the body parts (including the trimmed cupcake for the snout) with toothpicks and wooden chopsticks.

I did NOT dirty ice the dog. I just used a star tip and decorated the dog to look like my friends dog- that’s why the colors are varied. I made a separate cupcake for color and to stick the candles in. The name on the sign is just painted on regular liquid food coloring.

I guess my cake looked just like my friend’s dog cuz the minute I surprised him with it, he said-“OMG, That’s Aioko!” SUCCESS!