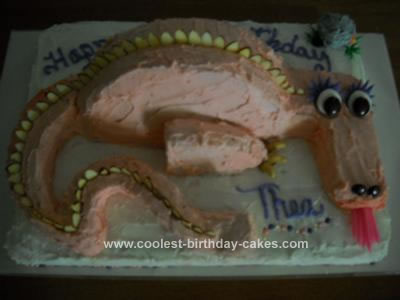 My granddaughter wanted a dragon for her birthday cake. She agreed that I could make the dragon pink since it would be for my little girl!

Using a serrated knife, I cut 1 layer in half for the dragon’s body. I then frosted the bottoms of the 2 pieces with a thin layer of frosting and gently pressed them together. And set aside on wax paper.

To create the pointy spinal ridge, I used sliced slivered almonds. Inserting the pointy end up I continued slightly pushing the almonds into the frosting along the dragon’s back on to the end of the tail. For the claws, I used 3 large cashews positioned at the base of each leg.

For the eyes I used colored purple fondant rolled out two 1/4″ thick circles, large. I free-hand cut the circle at the top to form the pointy eye lashes. I formed 2 slightly puffy rounds of white fondant for the eyes. I used 2 junior mints for the pupils. I used frosting to attach the eyes to the cake but a toothpick can be used also. I used two brown M&M’s for the nostrils.

I put candles where the mouth would be so that when the candles were lit it looks like the dragon is breathing fire giving off an awesome effect while everyone is singing “Happy Birthday”!

For the rock boulder at the corner of the white sheet cake I made a cup cake and frosted it with butter cream icing which I tinted gray by mixing food coloring. At the base of the rock I cut a small pink flower out of fondant and attached a small yellow ball of fondant for the center of the flower. I rolled a tiny amount of green fondant, cut and shaped about 3 blades to stick in the cake around the flower. I formed small pink, purple and white balls of fondant to use under the name and for the border around the sheet cake

My little granddaughter loved it! And everyone at the party thought that it was awesome! I never thought I’d make a dragon birthday cake, especially for my little princess, but I can truly say that this was the most fun I had making a birthday cake. 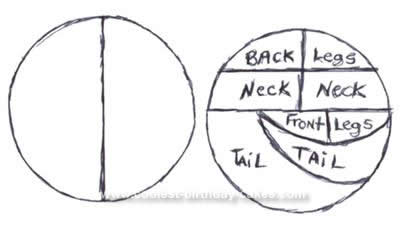