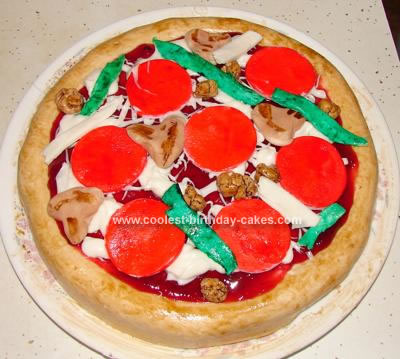 I started with two 10 inch cakes using one box of cake mix. I made two pizzas – one you see and the other ham and pineapple. I mostly followed the instructions from lifewithcake.com for the deep dish pizza cake. The marshmallow fondant was really easy and very tasty.

The sauce was strawberry preserves heated then red food color added. The cheese was melted white almond bark that was drizzled in no particular order. The cake was covered with the fondant and then on the edges and sides I brushed watered down brown food color gel with a paper towel. It came out pretty nice I thought and was a lot of fun!