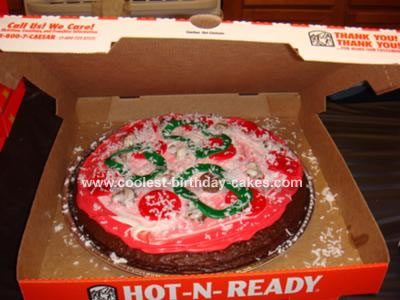 For my daughter’s eighth birthday she wanted to have a movie slumber party so I told her that would be fun but I didn’t know what to do about a cake. I like to base my cakes around the theme of the party so we sat and thought about it for awhile and decided to make a pizza for her cake.

This pizza cake wasn’t much effort at all and is very forgiving with mess ups. I started with the actual cake. I am a cheap person so I didn’t want to pay almost 20 dollars for a cake pan so I decided to use pizza pans. Renoylds makes the foil throw away pizza pans for about $3.00 so I bought that. I then used the recipe off of the back of the Hersey cocoa container and made a chocolate cake.(I’m sure that if you make a white or yellow cake it will look more like crust but my daughter only likes chocolate.) I filled 2 of the pizza plates with the cake mix and baked them.

On top of the buttercream I made cream cheese frosting and spread it to make it look like Alfredo. On top of that I used a mushroom candy mold and made the mushrooms. (I used melting chocolates and swirled milk chocolate and white chocolate together to make the mushrooms more realistic). I then used marshmallow fondant to make the pepperoni’s and bell peppers. I topped the cake off with shredded coconut.

The box I just asked for and didn’t have to pay anything for it. The cake had many textures form the softness of the cake to the crunchy of the candy and coconut.