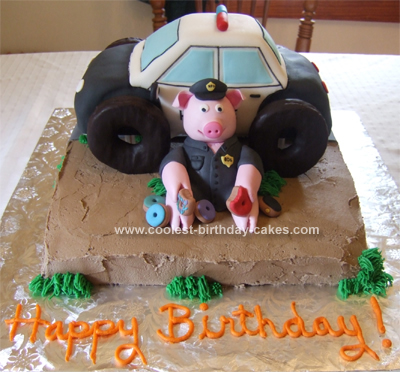 This Homemade Police Cake was made for my cousin’s birthday, who I’m sure you can guess, is a police officer. I had a hard time finding any cop/pig cakes out there so I found clipart images online to use for inspiration. I had used the Wilton 3-D car cake pan for my son’s birthday so I knew that’s where I wanted to start. I had never wrapped a cake in fondant before so it was all new.

I found a picture of the police cruiser’s from his town and used that as a reference. About a week before the cake was made, I started working on the pig. I used an approximate 75% gumpaste, 25% fondant mixture to sculpt with. Again, I used an internet image as a reference. When the time came to make the cake, I made the car as well as a sheet cake for the ground. I ended up taking the extra cake from when I leveled the sheet cake and stacked it to give myself extra cake to fit both the car and the sitting pig on. I originally wanted to wrap the ground in fondant as well, but I didn’t have enough on hand. So, I frosted the ground in buttercream and rolled out some gray fondant that was made from left over black and white fondant. I placed it on the edge of the cake and rolled out some yellow fondant for the dotted lines. I lightly scored the road so I had a straight edge to line the dashes up with and applied them with a little bit of water to adhere. Then my husband held up the police car over the cake where I wanted it to go while I held up a doughnut (tire) to get the correct height for my supports. I placed 4 supports just inside where the tires would be and 2 more in the middle for added support. I added a little bit of grass using the grass tip and green buttercream frosting.

I didn’t assemble the cake until I got to the location of the party. When assembling, I placed the cruiser on top of the supports. I then took 4 chocolate frosted doughnuts and put lollipop sticks just into the doughnut and slide them into the cake. Then I placed the pig leaning up on the cruiser and placed a few extra donuts around him. Finally, I added a little bit more grass around the pig. It was a big hit at the party! 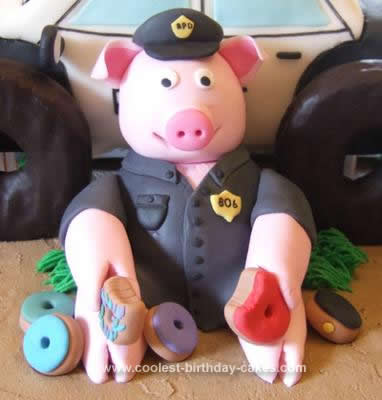 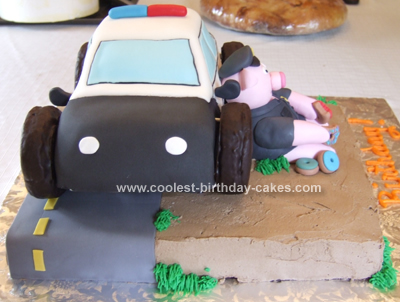