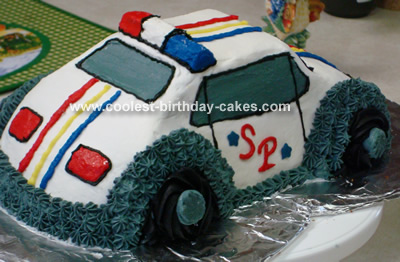 I was asked to make my brother-in-law’s birthday cake. He recently became a police officer so I wanted to make a police car cake that celebrates his hard earned achievements along with his birthday.

I purchased the Wilton 3-D car cakepan and transformed it into a police car with a little creativity. The cake itself is his favorite, yellow cake with homemade chocolate buttercream icing in the middle. The outside of the cake is iced in homemade buttercream icing with vanilla flavoring.

I used a variety of Wilton Decorating tips to give the car a 3-dimensional look, along with some edible glitter to make the lights look more realistic. I triedd to make the car look similar to his in color and personalized it with his initials on the side of the doors. He was pleased with the way his cake looked but more importantly he liked the taste of his birthday cake!