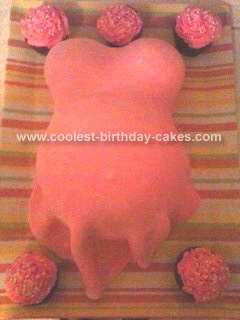 Since becoming pregnant recently I have found a love for baking that I never knew, and it was time for my baby shower and I knew I had to try to challenge myself and do something new. So I came online and searched for baby shower cakes and found lots of ideas, but the most challenging to me looked like the pregnant belly silhouette cakes. Cakes are not my thing I have actually never made a cake before this, besides helping my grandmother when I was younger. Cupcakes are my thing so I took one of my favorite cupcake recipes- the coconut cream and made the Pregnant Belly Cake out of it.

First thing I did was go to Michael’s craft store to look for some pans to bake the cake with. I purchased the 8“ x 3” round cake pan for the belly part and 4” x 1” round mini cake pans for the breasts. I brought the pans home and told my husband my plans and he told me to just stick to cupcakes but I was determined to give it a try.

So I made 3 cakes in the 8”x3” and 6 cakes in the 4”x1” and took a break, and let the cakes cool. I then made a butter cream frosting and sat it to the side, and I put some coconut in the oven for about 15 min and toasted the coconut and brought the 3 8”x3” cakes out to shape. I took the first layer and put some butter cream on it and then some toasted coconut and did the same with each following layer and I put a coat of my butter cream frosting all over the layers and I wrapped it up in saran wrap about 5 times and stuck it in the freezer.

I repeated this with the other 6 cakes and I let them sit in the freezer while I went to work for about 7 hours. When I came home I pulled them out and stuck them in the refrigerator till morning. The next day I took the 3 layer 8×3 and one of my long knives and began to carve, I tried my best to make it look like a round ball, and then I separated the 6 cakes into 2 – 3 layers and carved them. I then put more butter cream on all of the cakes and sat them in the refrigerator while I rolled out the fondant.

I bought the fondant from Walmart and I bought two boxes of the white fondant. I laid wax paper down and coated the paper with confectioners sugar and put red food coloring in the fondant cube and began to knead the fondant. I got the light pink color I wanted and rolled it out. I then took the cake out and placed a chocolate chip for the belly button and then laid the fondant over the whole cake.

I took a pizza cutter and trimmed around the breast and down the side a little and then left the rest the way it was. I made a black bow and polka dots and placed them on the cake, and I decided to take them off because I liked it better without.

The cupcakes I made where chocolate with a pink vanilla butter cream with ivory sugar pearls. After it was all said and done my husband said it looked like I made a mold of myself. I was very proud and so were my guest at the baby shower.