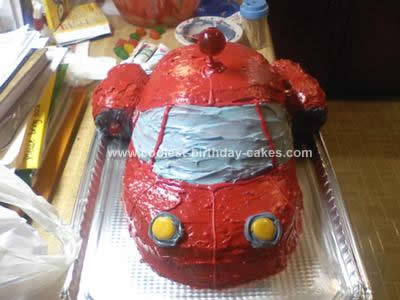 I made this Little Einstein Rocket Birthday Cake for my son on his second birthday. He LOVES the Little Einsteins and it was impossible to find a Little Einsteins cake from a store anywhere. I got the idea from a website that had some similar rocket cakes and I took a little from some and came up with some ideas of my own.

I used 3 cake mixes (the white cake with sprinkles you get at Walmart (is my favorite). I also used plain white butter cream icing. I believe I used 2 cans but could have been 3. I also used 3 cans of red icing coloring and yes I had to use all three to get the bright red, I thought it would be pink forever but it got there.

I made one regular rectangle cake pan, bought a tin foil like bread sized pan from Walmart, like you would use for a small single loaf of bread and made a batch of cupcakes. I only needed 6 of the cupcakes, the rest we took to church the next day for his birthday. Anyways, I bent and somewhat molded the bread pan to more of an oval with a curved bottom. I refrigerated all the cakes overnight and it really made them much easier to carve.

I started with the large cake and carved it with a large knife into a large oval with rounded edges. It was much easier than I thought it would be. Then I iced it with the red icing. I then added the rounded bread loaf pan to the top. I used a little of the scraps from the rectangle cake under the front of the top piece to make the front raised a little.

I then iced most of it red (leaving room for the windshield). I used a mixture of blue, red, yellow food coloring to make the gray color of the windshield. It was really guess work. I added a little of this, a little of that, had to add a little white icing a few times cause I overdid the color and just messed with it until I was happy with the color.

This brought me to the rocket blasters. I used 3 cupcakes iced together on each side. I then iced around them red. I iced the back of the yellow in the middle (using food color) and the front that dark mixture. The fins on the rocket blaster are graham cracker corners that I just iced red (they wont last forever and get soggy but they serve their purpose). I added a red tootsie pop on the top for the little bobbly thing. then I just added the detail. I put some red icing in a Ziploc bag and cut the corner to make the lines for the windshield and their detail on the rocket. Same for around the headlights but with the gray color. The headlights are sweet tarts, the big chewy ones.

The red bump in the front of the rocket blasters are dots. I used one of my son’s large toy rockets as a model. This was my first attempt at this Little Einstein Rocket Birthday Cake and at any really fancy cake that wasn’t a rectangle. It was a lot easier than it looked but it took time and patience (about 2 hours worth). I had a lot of fun making it though, and am planning for this birthday. I hope you enjoy! 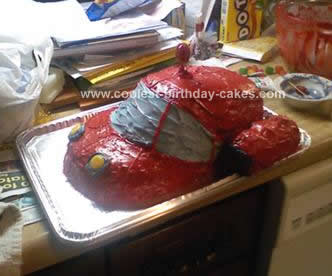 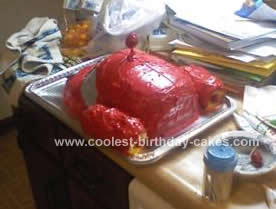 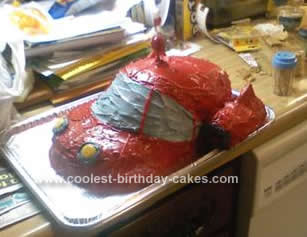