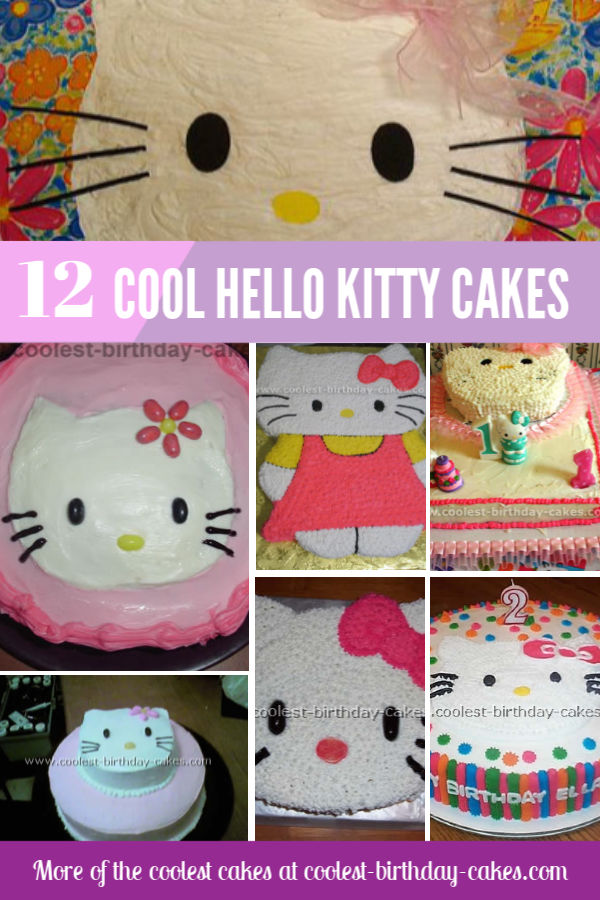 I made this Hello Kitty birthday cake for my daughter’s 2nd birthday. I used strawberry cake mix and baked it in a Hello Kitty pan you can purchase in several stores. White frosting was used to cover. The nose and eyes are jelly beans. The bow is made of marshmallow fondant I made a day before with a little bit of red food coloring to color it pink.

When I formed the bow I put some paper towel inside the bow to stabilize and preventing it from coincide. Then I left it to dry. The whiskers are licorice Twizzlers. At the end I used the marshmallow fondant leftovers and formed little balls and decorated around the cake. With a food glitter-gel I wrote her name and age at the bottom on the side. Done! Not too difficult to do I find. My little girl loved and was all exited about her birthday cake.

My daughter loves Hello Kitty and Wilton does not have a character pan for that. So for this Hello Kitty birthday cake I made a 12” round cake and shaved some off the top and bottom to make her head more oval shaped. From the scraps I made the ears and hair bow.
I used a basic star tip and buttercream frosting. I always use gel coloring too. Licorice whips for the whiskers (my husband had to pick them up from the candy store at the mall – I couldn’t find them anywhere else), a gummy peach for the nose and giant black jellybeans for the eyes (also from the mall store).

I make all my kids birthday cakes – I have four kids – but this was cuter than even I hoped it would turn out. Also I used a powder whitener to make the icing really white. It costs about $2.50 at cake decorating stores.

Contributed by Tricia V. from IN

My daughter wanted a Hello Kitty birthday cake and I just did not like the ones available in the stores so, I found a template for this one that is made from a 9×13 cake. I just printed and cut out the templates I found online and made the bow from M&M candies, the whiskers are from black licorice and the eyes and nose are Jordan almonds. Hello Kitty does not have a mouth so there isn’t one.
Everyone thought that my Hello Kitty birthday cake turned out so cute!

Contributed by Charlene B. from North Ridgeville, OH

This Hello Kitty birthday cake was made using 14″ Wilton cake pans. Various star tips and buttercream icing were used to decorate the side of the cake. The Hello Kitty face was outlined with a large round tip and filled with a star shaped tip. Quite easy to make and decorate. The birthday girl adored it.

To make this Hello Kitty birthday cake I used two 16×2 inch cake pans (A huge party). I prepared cake as instructed from 4 cake boxes. I used wax paper to line the bottom of the pans so the cake wouldn’t stick and it makes it easier to lift the large cake from the pan. Then, I split the batter between the two pans and baked as instructed.

I also used two 9-inch pans and 1 cake mix to make the head of Hello Kitty. I placed banana pudding, fresh bananas and crushed graham cracker in between the layers of both cakes.

To make the head of the Hello Kitty I got one of my daughter’s plush Hello Kitty dolls and put it on top of some foil to trace the shape of her head. I cut it out and used it as a template for the 9-inch cake.

I mixed in some rose pink tint to white frosting to make the pink layer of the cake. Then, I frosted the head with white frosting. In order to make the frosting easier to spread I whipped it with my mixer until it became light and fluffy. If the consistency is still too thick add a teaspoon of water to thin it out.

For the face of the Hello Kitty I used two black jelly beans for the eyes, one yellow jelly bean for the nose, one yellow jelly bean cut in half for the middle of the flower, and 5 pink candy coated almonds for the flower. For her whiskers I used a tube black gel. Make sure you start her whiskers up close to the eyes not near the nose or it won’t look like her. Then I used a star tip to finish off the sides of the bottom layer and around the face.

This Hello Kitty birthday cake is so easy to create and your little one will love it!

For this Hello Kitty birthday cake we used two boxes of Funfetti cake mix to make a double layer cake (two 13 by 9-inch cake pans) cooled. We flipped it right out onto a board and then froze it overnight (one upside down and the top one right side up to give the cake a more rounded face).

Using a fillet knife he then carved the rough image of the Hello Kitty birthday cake. You will need a picture to use as a reference. You can find many online or you may use ours as a guide, just print out. Then he started icing, filling in the rough spots; sometimes freezing it to get it hard and then going over it.

We used a ribbon from Michaels Crafts that he shaped into a bow. The eyes and whiskers were made from black gel. After looking all over for something yellow for the nose we finally found it in the form of a gumball from my sons Halloween bag. It was a great tasting Hello Kitty birthday cake!

I made this Hello Kitty birthday cake for my daughter’s 1st birthday party. I made a Duncan Heines chocolate sheet cake, split the layer in half and used Bavarian cream filling, and then covered with Wilton vanilla frosting. Afterwards I made the head out of a round 9″ pan and cut the head out and ears, that was made from Duncan Heines white vanilla cake and again covered with vanilla frosting with the star tip.
For the eyes I used black icing and yellow for the nose. The whiskers are drawn in using black icing. The bow on kitty’s head is made with ribbon and also used around the cardboard base for both head and flat sheet cake. Her party was a real hit!!! Happy Baking!

I decided to make a Hello Kitty birthday cake for a cousin of mine who said she had always wanted one. So I gave it a whirl. This was my first attempt with fondant icing. It wasn’t nearly as hard as I thought.

The cupcakes are 1/2 hello kitty picks and 1/2 chocolate iced with hand shaped hello kitty faces. On the cake I used store bought white icing with red food coloring for the pink. Then I added fondant flowers cut with cookie cutters and shaped out letters of the alphabet for the writing. I also added flowers on the sides of the Hello Kitty birthday cake.

I searched all over internet to find instructions for a hello kitty birthday cake. Finally I decided to try it myself (this was my first time making a character cake).

I used one standard cake pan and two small bread pans. I just started cutting and shaping (it took about 3 cake box mixes). Then, I found a picture of Hello Kitty in this dress and designed it from there.

The icing was is made 2 days before and it took a while to decorate. I prefer homemade icing with butter. It tastes so much better. Wilton makes a great-boxed icing so you can amp up the taste.

Contributed by Susan B. from Woonsocket, RI

To make this cake, I started by drawing kitty’s face on paper and then cutting it out, then tracing the shape on a 9″ round cake with toothpick pricks. If you don’t want to draw it, since the shape isn’t perfectly round and it’s important to get the shape right so it looks like her, you can always find a picture or scan one of her.

I used white frosting to do her face first. To make it smooth, I dipped my frosting knife in a glass of milk frequently. I then did all the lighter pink along the sides and around her face on top. Then, the darker pink edging with a star tip decorator added a lot. I then added black jelly beans for her eyes (make sure they’re spread apart enough and low enough on her face to really make it look like her) and a yellow jelly bean for her nose.

To make the flower by her ear, use five pink jelly beans and a yellow jelly bean cut in half, with the cut part into the cake. Lastly, her whiskers are done in a bought black gel frosting (I wouldn’t know how or if you can make jet black out of food coloring). Notice how the whiskers start up by her eyes, not her nose. You could, of course, substitute frosting for where I used the jelly beans, but I think the jelly beans make this Hello Kitty cake look very neat since they’re perfect shapes and it’s nice to add a little dimension and, of course, it’s easier!

Contributed by Joyce B. from Oklahoma City, OK

I made this Hello Kitty cake for my daughter’s 2nd birthday. This is cut out of a half sheet cake. I lined the cake pan with wax paper so I could easily draw the design and cut it out. I used a star tip to fill in the design.

The Hello Kitty birthday cake was a huge success and we had a great time making it together.