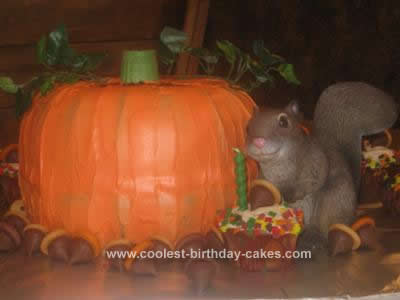 We were celebrating our son’s 1st birthday in October as part of my parents’ fall party complete with hayrides and pumpkin decorating for a bunch of our friends and family, so I wanted a cake with a fall theme. Our son picked up the nickname “Cheeks” shortly after he was born because of his chubby cheeks, so I thought it would be cute to have a squirrel or chipmunk accompany the cake. I was inspired by other pumpkin cakes on this site to try my own and then I added my own special touch with the acorns made out of Hershey kisses and mini Nilla wafers, piped together with a dab of chocolate frosting (and an extra dab for the acorn stem.)

The cake itself was two bundt cakes (I made one chocolate and one yellow cake). I trimmed the bottoms of each to make the cake flat and set them aside. I “glued” the two bundt cakes together with frosting in middle. The stem is a green ice cream cone, but because the hole left from the bundt pan was too big to hold the cone as high as I wanted, I took one of the pieces that I trimmed off the bottom of the cake and trimmed it down to fit in the hole and stuck the cone up through that. It worked perfectly. I used fake vines from the Dollar Store and placed a squirrel yard ornament next to the pumpkin. I placed several acorns around the bottom of the cake and I made cupcakes for the kids and placed them around the cake, too. I frosted the cupcakes, then rolled the edges in fall leaf sprinkles and finished them off with one or two acorns on top. My son’s cupcake was “held” by the squirrel and featured his birthday candle.

I was thrilled with how cute it came out and how simple it was to make this Pumpkin with Acorns Cake! Very easy! And some of our guests couldn’t even tell it was a cake. They thought it was just a decoration centerpiece for the presents!