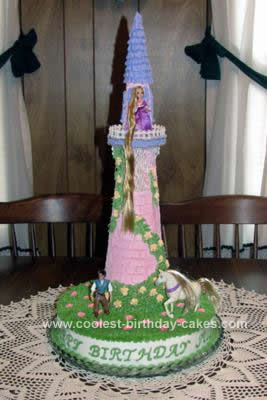 My granddaughter, age 5, is obsessed with Rapunzel and asked me to make her tower on a cake. I decided the easiest way to accomplish this Homemade Rapunzel Birthday Cake Design was to construct the tower in advance. I made it the weekend before the party.

I purchased an 18 inch high Styrofoam cone as well as a 6 circle of Styrofoam. I made a hole in the bottom of the cone for a dowel to be put into the cake for stability before I frosted it. I cut the circle to about 3/4 inch thick using a serrated knife. Then, using a glass punched a hole into the center. I inserted this circle onto the cone to make a platform.

I iced the tower in pink royal icing (the kind you use to make flowers), smoothing it with a butter knife repeatedly dipped in very hot water. (It doesn’t have to be perfect, it’s bricks after all.) It hardens rather quickly, so I immediately made bricks on the side using a toothpick. I iced the platform in royal icing tinted pink.

I made the spire on the top from a cone rolled out of paper, which I covered with a layer of tape to keep the icing from soaking in. I made the shingles using the rose tip #104. I made a door using the basket tip, and drew windows around a piece of foil to resemble the glass. I added a little railing and support for the balcony using pieces of plastic I had left over from a wedding cake I had made. You could substitute whatever you could find to do the same. I added some plastic beading (in my case bead trim I got from Joanne’s Fabrics I happened to have) to make it look a little fancier.

I then made a vine of leaves going up the side of the tower and added tiny drop flowers I had made previously. I made the cake in a 12 x 3 inch round cake pan. It took two batters. I simply iced it white and covered the top in green using the grass tip, adding more premade drop flowers here and there and added some borders top and bottom. I pushed a 6 inch long wooden dowel into the center of the cake and carefully pushed my premade tower onto the towel (the hole having been made previously in the bottom of the tower as I instructed above.) I then added some little plastic figures (they actually belonged to the birthday girl.) Rapunzel was a little wobbly so I used two straight pins through the sides of her skirt near her waist into the Styrofoam behind her and she was secure.

The cake was a big hit and since most of the work was done the week before, assembly the morning of the party was a snap. 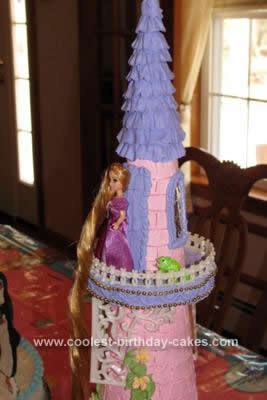