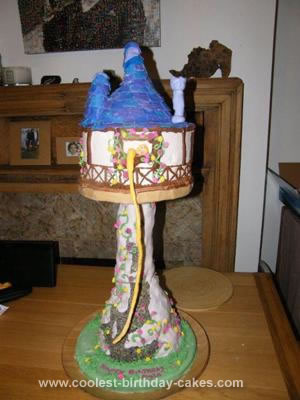 One month before her 3rd Birthday when I saw my daughter standing at the top of the stairs holding her blanket to the top of her head so that it would trail all the way to the bottom and saying “look at my long, lovely hair”, I knew right away that her birthday cake had to be Rapunzel. We had watched the movie more times than I can count so my thoughts were immediately that I wanted to make a Rapunzel Tower birthday cake.

I played the movie and with my camera and took screen shots of the tower from different angles and got to work. To start I had my husband build a stand, we made one all from wood because he had it available but in hind site I think I probably could have done one just as sturdy using cake drums. My stand was a 14in circle on the bottom and a 10in circle on the top connected by a long wooden rod which my husband nailed in place.

I wrapped plastic wrap around the wooden dowel and then covered the bottom circle with fondant. I then used homemade rice krispie treats to build up around the pole and create the tower. This was not as easy as it sounds. On my first attempt the rice krispies where too soft and I woke up the next day to find my tower collapsed, so if I where to ever do this again I know I would have to wait at least a day before using the rice krispie to ensure they where hard enough to take the weight.

I then made a 10in round cake. I carved out a small space for the window and iced in butter cream (probably would have looked prettier in fondant but I’m just not a huge fan of the taste so as it was for us I did most of it in butter cream). The roof was formed out of rice krispie, I just took a thin sheet of rice krispies and folded them into a teepee shape and covered in fondant tiles.

I used fondant to create the details on the roof and to create the crumbling plaster effect on the main tower. All of the flowers and detail around the house where piped butter cream.

For Rapunzel I printed out a picture off the internet (I did not use edible rice paper as it was for us and I knew not to eat it, if you did it for someone else you probably should have it made with edible ink/paper). I cut out just around her face and pressed it into a piece of yellow fondant shaped to look like her hair. Then I rolled a very long piece of yellow fondant around a piece of craft wire and attached to the cake.

When finished it was about 2 1/2 feet tall and my favorite cake I have made so far. And most importantly my daughter loved it!