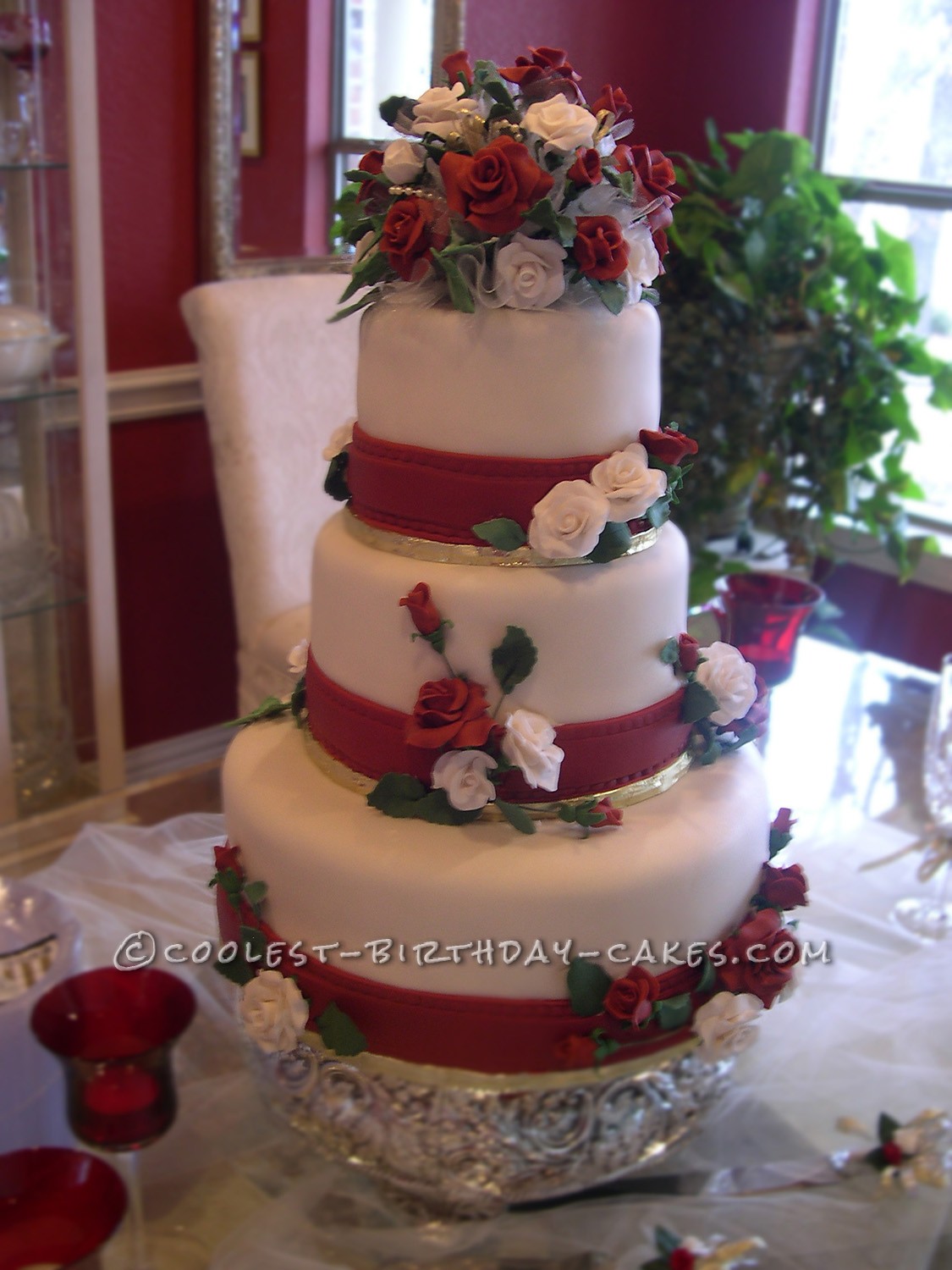 This red and white rose wedding cake was my first effort at fondant and only my third attempt at a wedding cake. My girlfriend, the bride, was on a strict budget, and since I’m not very bright, I offered to make her cake as a gift. She was very grateful but still had strong opinions about what she wanted. Much of which I had not done before. But this is how we learn…dive in.

She wanted three tiers, fondant, burgundy red and white roses on the cake as well as the cake-topper, each tier to be encircled with red ribbon, all adorning a juicy, soaked rum cake. No problem. Wait….did I really just say “no problem?”

The red and white roses were the first item on the list. I enjoyed shaping and sculpting them out of sugar paste. I made them well in advance so that they could dry. So far so good.

I had always heard that fondant icing doesn’t taste very good and that a mixture of rolled buttercream with it will improve the taste, although be more difficult to work with.  Well…let’s just mix up a big ol’ batch of that! Done.

Making the cake from scratch was easy enough, and then soak with rum…then more rum…my friend likes rum. And by friend I mean both of us. I hadn’t yet learned that fondant doesn’t like moisture. Just nobody light a match!

The big day was almost here so time to level the cakes and cover them with fondant. Um…not so easy. I immediately got frustrated at how HUGE these thin rolls have to be to cover the cake! And mixing rolled buttercream with fondant decreases the elasticity of the icing so that didn’t help….more fondant, less buttercream. Finally I got the right blend and was successful at getting the largest tier covered. But alas it wasn’t for long as the fondant began to slide off the cake. What the heck? Was it the room temperature? The rum? Too thin? Now I was sweating because the wedding was the next day…just hours away, and did I mention it was in my home? No I don’t think I did. I was going to pull and all-nighter.

Eventually I got the fondant on all tiers, and the cake was assembled. Then the real fun began, applying the decorations. I built a bouquet of the sugar-paste roses along with gathers of tulle and pearls for the topper and rolled and embossed colored fondant for the ribbon for the base of each tier.  So, 4:30 am the day of the wedding, done. After that I prayed that I could carry it into my dining room table. Man! Cake is HEAVY!

The bride and groom loved their cake. It tasted wonderful and made for memorable wedding photos. The couple was moving immediately after the wedding from Texas to Minnesota. The bride was the lucky one to transport the top, first year anniversary tier to their new state. She said she was a little bit high from the fumes coming off the rum-cake and was a bit paranoid at the thought of getting stopped by officers for any reason along the way. 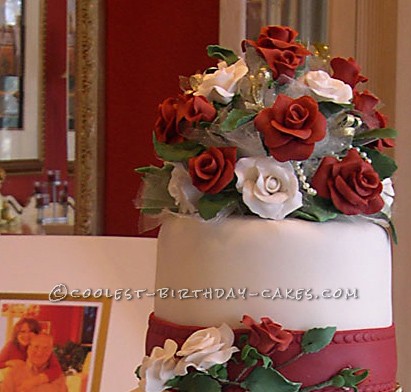