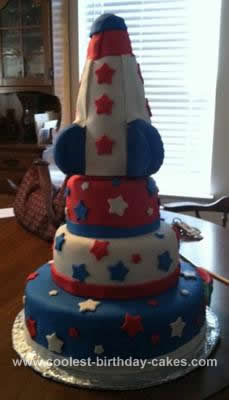 I made this Rocket/Patriotic Cake for a friend who wanted to serve this cake right before a big fireworks show. Being a guy, he wanted something with a huge “wow” factor so a rocket was suggested. This cake was the largest cake I’ve ever made. Each tier was two layers–10″, 8″ and 6″. The cake itself was all vanilla. For each tier, I made one layer white, the second layer I dyed blue. In between the layers were diced strawberries to give it the red, white and blue look. It tasted yummy and looked great cut.

I tried to make the rocket out of cake a few weeks beforehand but I found it to be crumbly and kind of a mess so I made a double batch of Rice Krispie treats and cut out a bunch of circles that I piled on top of each other. I cut two of the circles in half, making the “legs” of the rocket. The good thing with the Rice Krispie stuff is you can mold and shape it easily so that’s what I did until I got a shape I could live with. I hardened it in the freezer and then covered it in buttercream.

The entire cake was covered in vanilla buttercream (dirty iced). I then covered each layer in red, white or blue marshmallow fondant. I hid ugly edges with a fondant ribbon trim and covered the entire cake with fondant stars. Covering the rocket was extremely difficult. Next time I would add the legs later, after I’d already covered them and maybe stick them on with a toothpick or something. It was a tough shape to cover and I had a lot of help from my sister.

I liked this cake because the colors were so vibrant and it stood about two feet tall so it really caught the eye. It also tasted great and was completely edible which is always fun. While the dye inside was completely unnecessary, it was really neat to have a slice of red, white and blue cake. It wasn’t perfect, but I was happy with the finished producut.