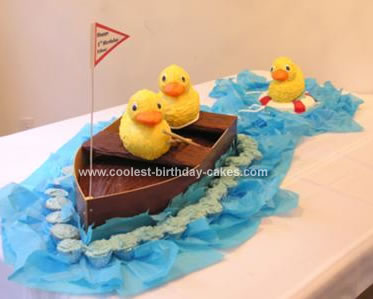 My son loved rubber duckies around his first birthday, so I chose rubber ducks as the theme for his party. Over a few days my mom, my husband, and I created a ducky cake with a rubber duck family out on a boating venture.

The boat contained the mommy duck and the daddy duck, and the baby duck was happily floating on a life preserver behind the boat. We made the ducks with one Rubber Duck cake pan. Once one duck had been successfully baked we began icing it while another one was baking. It was quite the assembly line and tons of yellow icing.

At the time my son was still taking two naps a day. So, each time he woke up from a nap a new duck would be out on the counter. He would smile so big with amazement and he would say “duck”. In order to have enough cake to feed all of the guests that we were expecting, we decided to make the two ducks ride in a boat.

The boat was made up of a double layer sheet cake, luan pieces, and 1×6 boards. We first baked the large sheet cakes, iced, and stacked them. The stacking was a big task that took some patience, a careful and quick hand. Then we carved the cake to the shape of the boat. In the mean time, My husband constructed the outside shape of the boat by bending two long pieces of luan (very thin boards) and connecting them with a shorter third piece. Then he took two 1×6 boards and connected them to the edge of the luan piece to make seats for the ducks. My husband also glued some plastic sticks onto the boards to help stabilize the ducks and hold them in place. Without the sticks the ducks would have just fallen off the boards.

The ducks were actually pretty heavy once they were iced. We then iced the sheet cake brown and gently place the boat frame around the sheet cake. Next we placed the ducks on top of the sticks and prayed they would not fall off. The boards were then iced brown to look like the rest of the boat. To make the small life preserver for the baby duck, we used a round pan that was a little bigger than the duck. Then we iced the cake to look like the water was coming up through the hole in the middle. We also took a rope and laid it around the edge, and put a thick layer of icing over the rope to make it look like the rope was looping through the preserver.

I decorated around the boat and life preserver with blue tissue paper and blue iced cupcakes that were suppose to look like part of the waves. We also added some extras like the spoons and the flag to the boat to made it look cute. The duck on the life preserver was my son’s special cake for him to dig into. Of course the duck was chocolate.

I was very thankful to have my mom and husband to help me, and the time to devote to such a project. The tips I would suggest for such a task would be to take your time, don’t try to do it all in one day, bake the large sheet cake in parts so that it is easier to stack, and make tons of icing. Also, I would suggest to buy the red icing in the tube instead of trying to make the red icing from the food coloring bottles. It takes a ton of food coloring and tends to look more pink than red. You could also just replace the red icing on the life preserver with a blue icing.

Overall this was not a simple design and it took a lot of long hours to complete. However, it was worth it in the end to see the final product and the joy on my son’s face. He loved his ducks!