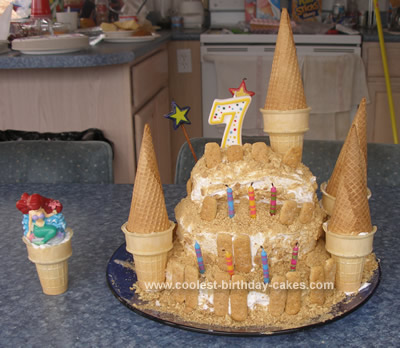 Here is a sand castle cake I baked for my daughter’s 7th Birthday on a houseboat trip. Not an easy feat being that we were in the middle of the lake. I used a regular store bought white cake mix and a whipped white Frosting.

For the “sand” effect I crushed cinnamon graham crackers. I felt the cinnamon was a more realistic look for sand with the varying colors. I used all disposable baking pans, 1 9in. round, 1 6in. round and 1 cm.loaf pan.

I frosted each on separately before stacking. Next I sprinkled the “sand” over the cake. I used graham sticks to add castle dimensions and then added the “turrets” of ice cream cones. To hold the cones together I used icing to glue them.

The cake was a hit with all the kids, especially my daughter who had no idea I was making her a cake at all, and the parents were amazed that I pulled it off on the houseboat. Especially since I was out crushing graham crackers with a rock in the morning, (I couldn’t find a rolling pin on the houseboat).

I even was brave enough to try this cake again when I got home and had a family party. Despite the look it was quite easy and very fulfilling to see my daughters happiness and everyone’s reaction.