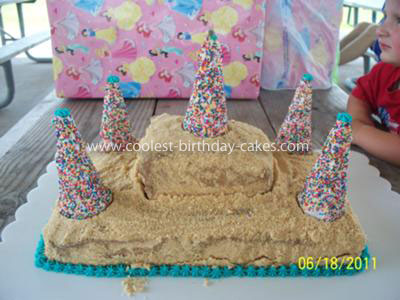 I pulled my ideas for this Sandcastle Cake from other cakes from this site.

I baked a 9X13 chocolate cake. Thought if there were crumbs, would be dirt! I also baked a loaf pan with about half of a second chocolate cake mix (made cupcakes to freeze with other half). Let the cakes cool.

I frosted the 9X13 with homemade chocolate butter-cream frosting. I thought chocolate would again help with the dirt effect. I cut off 1/3 of the loaf cake and let the kids eat that; I placed the 2/3 portion in the middle of the frosted 9X13. I did insert some dowel rods to help stabilize. I then frosted the loaf cake portion.

The night before, I ground 1 box of vanilla wafers for the sand. I thought by letting them dry out a little would add to the texture. I then covered the frosted cakes with the “sand.” The vanilla wafers worked just like sand. It could be molded and even cracked like a real sandcastle.

While the frosted and sanded cakes were in the fridge, I covered the ice cream cones with some thinned down white butter-cream (added some Caro syrup). Covered with sprinkles; I wanted some color on the cake. Could easily use colored sugar and make a theme. I placed cones in the fridge to set-up.

When closer to party, I placed the cones on the cake. I edged the cake with some teal colored butter-cream flowers and topped the cones. My goal was to place candles on 4 of the cones, but was an outside party, so didn’t do that. This cake did have to travel for 1 hour and did remarkably well. It was a big hit at the water park and with my 4 year old daughter!